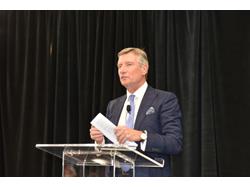 Las Vegas, NV, January 29, 2020--Piet Dossche, CEO and founder of USFloors, was inducted into the World Floor Covering Association (WFCA) Hall of Fame at the TISE expo in Las Vegas. Dossche is best known for developing and launching the Coretec line of rigid core LVT products, which has grown to become one of the leading brands in the category.

In his remarks at the induction ceremony, Dossche expressed his gratitude to the WFCA and to Pami Bhullar for nominating him for the award. He encouraged the audience of floorcovering leaders to work hard to maintain margins for a healthy and sustainable future. “Profit is not a dirty word. Profit is the lifeline of any business-it enable us to invest, pay our associates, reward our shareholders and give back to our communities,” Dossche said from the podium.

Dossche started his career in the flooring business 39 years ago, working first with Roger De Clerck, founder of Beaulieu, in Belgium, and quickly moved to the U.S. to work with Carl Bouckaert, the CEO of Beaulieu America. In 2001, Dossche started USFloors in his guest bedroom with an initial focus on cork and bamboo flooring but quickly shifted his focus to rigid core LVT with the launch of Coretec. Dossche sold the USFloors business to Shaw in 2016 and took on the added responsibilities of EVP of Shaw’s hard surface business.

In his final remarks, Dossche thanked the team that helped him achieve success including his son, Julian, brother, Jan and wife, Sabine. He added that trophies are merely recognition for past performance and vowed to focus on improving the health of the industry for those who come behind us.

Dossche is the 50th flooring professional to be inducted into the WFCA Hall of Fame.