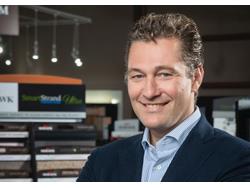 Q: How has your career prepared you for your new role as president of the Mohawk Flooring North American (MFNA) segment?

A: I worked in finance; I built manufacturing plants, oversaw big capital projects and ran sales and marketing for different divisions of the company. I’ve run different business units. I have been involved in acquiring companies and integrating those companies. If you look collectively at those accomplishments, I think they are good preparation for this role because I’m going to do similar things here.

Q: Belgium flooring companies have always had an entrepreneurial flair. How do you intend to put that mindset to work in a MFNA with over $4 billion in sales and 18,000 employees?

A: I believe in getting things done, keeping it simple and delivering on the customer promise. I value efficiency, effectiveness, clear organization and clear accountability. And, I like to have fun while doing it. These are business principles that I live by and want to implement in the Mohawk Flooring North America business.

Q: The American flooring business has been heavily influenced by leaders with Belgium roots: Carl Bouckaert, founder of Beaulieu of America; Filip Balcaen, former CEO of Balta and founder of IVC; Piet Dossche, founder of U.S. Floors; and now you. What is it about the Flemish heritage that has driven these men to make such a difference from a leadership perspective?

A: My family’s background was in the flax business in the ‘50s and ‘60s in Flanders, a region of Belgium. Flax was used in particle board, and so a lot of the flax entrepreneurs ultimately became flooring entrepreneurs. You could say the Flanders region is very similar to Dalton, Georgia. It’s not a coincidence that Bouckeart, Balcaen, Dossche and I are all originally from that region. You could compare it to the Lorberbaum and Shaw families in Dalton. The only difference is that we were in a very small country, and, in order to survive, we had to be export-driven and very much exposed to the international markets, while the Lorberbaum and Shaw families could serve a big domestic market. This explains why the Belgians always came to America and not the opposite flow.

See the February issue to read the complete article.