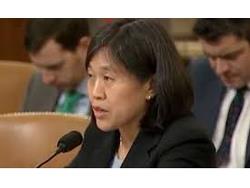 Washington, DC, December 11, 2020--Katherine Tai has been named as the next U.S. Trade Representative.

Tai was born in Connecticut and raised in Washington, DC. She is a graduate of Yale and Harvard Law School. She taught English for two years in China.

According to the Wall Srreet Journal, "Ms. Tai has spent much of her career working in the government, first as a lawyer for the Office of the U.S. Trade Representative focusing on China, then as a Congressional staff member.

"A fluent Mandarin speaker, she was a top lawyer with the U.S. Trade Representative’s office on China issues between 2007 and 2014, litigating Washington’s disputes against China at the World Trade Organization. She has said China needs to be confronted strongly and strategically."