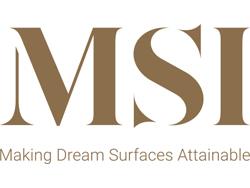 Orange, CA, December 12, 2019-MSI has announced the establishment of a joint venture with Spectrum Quartz to create the leading quartz slab manufacturing production facility in the United States.

The team has been working tirelessly over the past several months to transform the existing 360,000 square foot building into a state-of-the-art quartz manufacturing facility. The first two quartz lines will begin their test production later this month, with commercial production expected in the first quarter of 2020. Two additional lines will be operational shortly thereafter with ample space for further expansion.