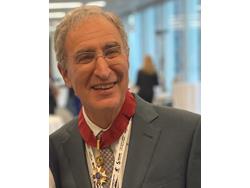 Atlanta, GA, June 14, 2022- On June 6, Her Royal Highness Princess Astrid of Belgium visited Atlanta to confer upon Mohawk chairman and chief executive officer Jeff Lorberbaum the honorary title of knight commander of the Order of the Crown. The honorary knighthood recognizes Lorberbaum’s services to industry and the Belgian economy.

Georgia Governor Brian Kemp and a delegation of Belgian government cabinet ministers were among more than 500 guests at the reception hosted by the Belgian Consulate General in Atlanta and the Belgian American Chamber of Commerce.

“I am honored and humbled to receive this recognition,” said Lorberbaum at the event. “I am pleased to accept it on behalf of all of our associates, who have made Mohawk the world’s leading flooring manufacturer by providing exceptional innovation and value.”