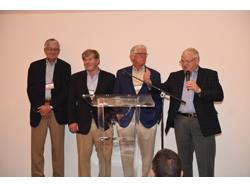 Chattanooga, TN, July 15, 2019-On July 13, Mannington Mills held a dinner at the Hunter Museum in Chattanooga, Tennessee as part of its biennial meeting of the family ownership group, which includes senior management and board members as well. Three retiring board members were honored at the event: Tom Davis, Brian Duffy and John Chopack.

Davis started his flooring career at Milliken and was tapped to lead Mannington as CEO from 1993 to 2011. Brian Duffy and John Chopack both spent their careers outside the flooring industry. Duffy served as president of Andrew B Duffy Inc., a custom fabricator of steel, stainless, aluminum and alloy ASME code pressure vessels, weldments, and structures for petrochemical, refining, chemical, power generation, and manufacturing clients.

During the celebratory weekend, attendees split into four groups, each spending a day serving a different nonprofit in the Chattanooga region.

John Chopack, Brian Duffy, Tom Davis and Keith Campbell, chairman of the board for Mannington.