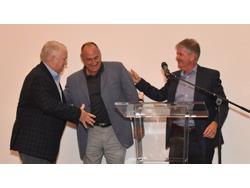 Pitman retired from the position in May 2019. Pitman, who is known for his sense of humor, recounted the story of Keith Campbell's inquiry, "How many people work at Burke Industries?" during the due dillegence process when Mannington was purchasing Burke, to which Pitman answered, "About half of them."

Mannington acquired Burke in 2008, and Pitman, who was CEO, continued to lead that division until his retirement.

Pic: Keith Campbell, chairman of the board for Mannington; Bob Pitman; and Jack Ganley, president of the Mannington's commercial business