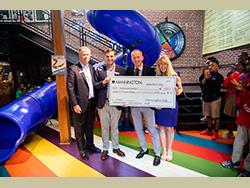 Salem, NJ, June 21, 2018-Mannington presented Ron Clark Academy co-founders Ron Clark and Kim Bearden with a $25,000 donation to help with ongoing capital funding needs, including the construction of a new building on its current campus.

In addition to donating flooring in the Academy’s current facility, Mannington Commercial (based in Atlanta, GA) has also arranged to donate much of the flooring for the Academy’s new building.

In 2007, the Ron Clark Academy opened in downtown Atlanta in a 100 year-old renovated factory. The Academy is a non-profit middle school with students in grades 5-8 from a wide range of economic backgrounds. It has received national and international recognition for its success in promoting academic rigor, creativity and increased student engagement in the classroom through unconventional teaching methods.