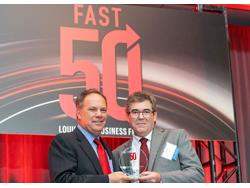 Now in its 23rd year, the list celebrates the 50 fastest-growing private companies in Greater Louisville based on terms revenue.

This achievement follows Louisville Tile being named one of Kentucky’s Top Places to Work in 2022 and marks the second consecutive year and third time overall that the company has received this award.