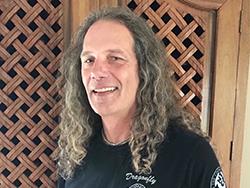 Flowood, MS, September 5, 2019-The National Tile Contractors Association (NTCA) is pleased to announce the winner of the 2019 Tile Setter Craftsperson of the Year Award is Lee Callewaert.

Callewaert, who has been setting tile for over 35 years, is the co-owner and senior craftsman of Dragonfly Tile & Stone Works, Inc. in Grafton, Wisconsin. He began his career as an apprentice in Tennessee. Later, he moved to Wisconsin and where he started as a journeyman tile setter and later became foreman. In 2003, Callewaert founded Dragonfly Tile with his wife, Jane. By this time, he found his niche in custom tile and stone designs and installations.

Currently, Callewaert specializes in highly-technical and challenging commercial and residential tile and stone installations. Additionally, he is a Certified Tile Installer (CTI) and dedicates a portion of his time mentoring the emerging setters on his team.

In his nomination letter, Dragonfly customers and apprentices stressed Lee’s commitment to the next generation of tile setters, saying he leads by example and teaches his students the importance of continually obtaining more knowledge in order to improve their skills. “He isn’t just teaching the trade, but self-worth, patience, gratitude and so much more,” said Kate Shortall, owner and senior designer of Blackstone International.

This is the inaugural year for the Tile Setter Craftsperson of the Year Award. Becky Serbin, NTCA director of education and curriculum, said she worked with NTCA training director Mark Heinlein to establish a NTCA member award that celebrated and recognized the career tile setter and his/her achievements. “This is our lifetime achievement award for tile setters,” Serbin said. “It recognizes craftsmanship, training, and legacy of some of our members’ contributions to the industry.”

Over 20 candidates were nominated for the award. Requirements included a letter of nomination, a career summary, and descriptions of the three to five projects the nominee has worked on. Nominees were required to be NTCA members, have a minimum of 15 years of installation experience, and still be active tile setters at time of nomination. Judges evaluated nominees based on their artistry, technical accuracy, problem solving skills, continuing education, and mentorship or leadership of others.

As part of his award, Callewaert will receive an all-expenses-paid trip to Total Solutions Plus, taking place October 26 to 29 in Nashville, Tennessee. He will be recognized at the NTCA Annual Meeting while attending the event.