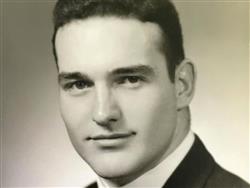 Hubbard earned a football scholarship at Duke University and after serving in the U.S. Army, earned an MBA at UNC-Chapel Hill.

Hubbard began his flooring career in 1965 at Trend Mills, a carpet manufacturing company in Rome, where he was assistant controller, according to his obituary. Seeing opportunity in this industry, he joined with business partner Bill Carroll and started Marglen Industries Inc. He and his wife, Patsy, invested all their savings and Marglen Industries was born in their dining room in 1971.

The name Marglen came from a blend of the two men’s wives, Margaret Patricia Hubbard and Glenda Carroll.

By the late 1990s, Marglen was vertically integrated from the recycling of 100 million plastic bottles for fiber to the finishing of carpet, employing more than 1,000 people.

He later sold the company to Beaulieu of America in 1998.