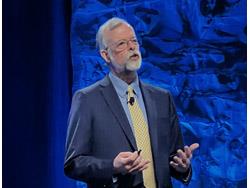 Colorado Springs, CO, May 16, 2022-At the Starnet meeting in Colorado Springs, Alan Beaulieu of ITR Economics reported that the non-residential flooring market will remain strong through the middle of 2023.

He also noted that inflation in flooring is starting to level out, and that prices will not go down but will stop going up.

Regarding the larger economy, Beaulieu noted that the Q1 GDP dip was a technical situation, and his team isn’t calling for a recession until sometime in 2026. A recession is characterized by two negative quarters of GDP. He emphasized that while the media is predicting a recession in 2022, ITR’s forecast doesn’t support that.

The analyst believes that the next economic slowdown will take place in the second half of 2023, but it won’t equate to a recession, though the $30 trillion trade deficit could impact the dollar eventually.

He also noted that the price of oil, which is $110/barrel now, will rise to $117/barrel and hold, not declining until 2023’s second half slowdown.

ITR Economics, the oldest privately held, continuously operating economic research and consulting firm in the U.S., says that its forecast accuracy is 97%.