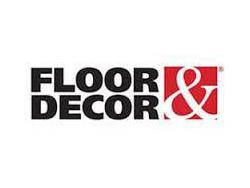 Atlanta, GA, August 16, 2022 - Faced with pressure from big box stores, the number of independent flooring retailers is on the decline. When the Census Department last reported on the category in 2016, roughly 9,200 retail firms operated just over 11,000 stores, luxury-brand consultant Pam Danziger writes in a recent Forbes article. Three years later, there were nearly 10,700 establishments operated by about 8,800 firms, and those numbers have likely declined since then.

“Not only is Floor & Decor opening stores rapidly, it is generating more sales out of those locations,” Danziger notes. “The average retail ticket was up 18% in the second quarter, driven by customers trading up to its better and best offerings, notably laminate and luxury vinyl, which now represent 27% of sales, up some 40% over the previous year.”

Offering design services is part of F&D’s trade-up success. On the company’s Q2 earnings call, CEO Tom Taylor said, “We continue to find that when a designer becomes involved with the project, we see a higher customer satisfaction score, a higher average ticket, higher basket selling attachment rates, higher penetration rates for our adjacent categories and a higher gross margin.”

The company, which currently has about 800 in-store designers on staff, is now rolling out in-home design services in select markets. Following successful launches in Houston, Dallas and Miami, designers will begin making house calls in the Washington, D.C., market this quarter and Atlanta next quarter, Danziger reports.