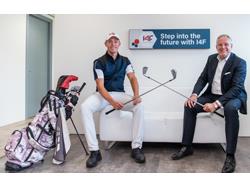 Hamont, Belgium, December 16, 2020-I4F has entered into a golf sponsorship agreement with Koen Kouwenaar, a 22 year-old Dutch talent, who turned professional this year. The company also said it is launching the I4F Global Flooring Leaders Golf Tournament during 2021. The sponsorship begins as of January 1, 2021 and represents the first activity in the company’s drive for a broadened brand awareness of I4F and its technologies.

As lead sponsor, I4F has several exclusive rights, including the placement of its logo on the front of Kouwenaar’s cap and golf bag.  I4F is also highlighted on his official website and can also leverage the sponsorship by using Kouwenaar’s name and photos in its promotional activities and social media.  Additionally, Kouwenaar will host golf clinics, play with I4F and its guests as well as participate in the inaugural I4F Global Flooring Leaders Golf Tournament expected to take place during the fourth quarter of 2021.

In 2019 , Kouwenaar won the Spanish amateur championship, the Dutch junior international open, national open and made the cut in the KLM open as the only amateur. At the end of that year, he was positioned as number fifteen on the world amateur golf ranking.  2021 will see him playing the pro golf tour or Alps tour, combined with eight starts on the Challenge tour.