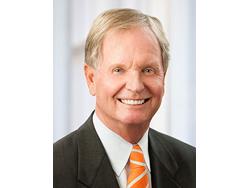 Upon graduating from Episcopal High School in Alexandria, Virginia, Henderson matriculated to the University of North Carolina at Chapel Hill. After graduating, he became a lieutenant in the U.S. Navy and served as operations and salvage diving officer on the USS Deliver. He was awarded the Navy Achievement Medal for his service in Vietnam.

Returning home, Henderson earned his MBA from Emory University then joined Burlington in 1974; in 1978, he was transferred to London as general manager of European operations. In 1982, he returned to the U.S. to serve as president of Burlington Denim. In 1986, he also become president of Lees Carpet division. In 1998, he was promoted to CEO and, ultimately, chairman of the board. He retired from the company in November of 2003.

Under his leadership, and working alongside Jack Ganley, Ralph Grogan and Jim McCallum, Lees Carpet grew from $90 million in 1990 to $350 million ten years later.

Henderson is survived by his wife, Lindsay, to whom he was engaged after a two-month courtship, as well as by his two children, George William Henderson IV and Stephanie Henderson Molster.

A celebration of his life will be held at Grace Church Cathedral at 98 Wentworth Street in Charleston, South Carolina, on February 18, 2022 at 2:00 p.m.