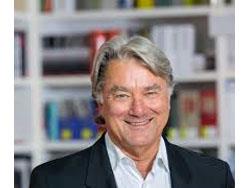 Washington, DC, January 29, 2021-​The ​American Society of Interior Designers​ (ASID) has named renowned designer Gary Wheeler, FASID, FIIDA as its chief executive officer. Previously appointed as interim CEO, the Society’s oversight committee and CEO search committee finalized the decision to promote Wheeler to the permanent position. Maintaining a long-term commitment to the industry from ASID and its staff, Wheeler will continue to showcase the impact of design and the role of interior designers creating spaces that promote the health and well-being of people.

With a career spanning more than 40 years, Wheeler has demonstrated tremendous skill and expertise within the design industry. He has led practices at Perkins&Will, Gensler, and HDR; and designed workplaces for companies such as Apple, Time Warner, American Express, and JP Morgan. Wheeler has been a member of ASID since he was a student. His many ASID accomplishments and milestones include being named the Designer of Distinction (1999), granted fellowship, serving as national president (1994), and much more. Beyond Society honors, Wheeler has received the Senior Fellow Award from The Design Future Council, and was named an IIDA Fellow, one of the very few designers with Fellow distinction from ASID and IIDA.

One the many shared visions of Wheeler and ASID is the importance of research and evidence-based design. To ensure research remains a cornerstone of the Society, Wheeler has elevated longtime ASID staff member Susan Chung, Ph.D. to the role of vice president, research and knowledge. Dr. Chung constantly seeks to address the impact of design research. Her work aims to improve human experiences in the interior environment, translate research into applicable design implications and demonstrate research projects that create meaningful positive impacts. She has developed some of the Society’s signature research, including the ​Outcome of Design Awards​ and ​Impact of Design Series​, and aided in the COVID-19 response with projects such as the ​Resiliency Report​ and ongoing ​Pulse Surveys​. Dr. Chung has a doctorate in human behavior and design from Cornell University and master’s and bachelor’s degrees in interior design from Michigan State and the University of Florida, respectively. Additionally, she is on the IWBI Research Advisory and received the 2020 IWBI Community Award.