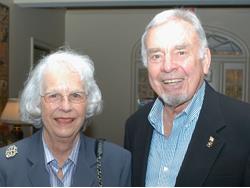 Rome, GA, January 31, 2019-Gardner Wright, 89, died January 26. After graduating from Georgia Tech with a degree in textiles and serving in the U.S. Army, Wright began his career in the carpet industry with Anchor Rome Mills in 1953. He became a partner and president of modern fibers sales, which became the largest importer of jute carpet backing from India and Bangladesh.

In 1983, he became the vice president of sales and marketing and one of five general partners of Synthetic Industries, the second largest producer of polypropylene carpet backing in the world. He retired from SI in 2002.

Wright served as chairman of the Georgia Textile Manufacturers Association twice and was the first to serve two consecutive terms.

Long active in the Rotary Club, Gardner served as president and had 63 years of perfect attendance. In 2011 he was presented the Rotary International District 6910 W. Lee Arrendale Vocational Award for excellence in vocation, achievements in the community and academic achievements.

Married for 61 years to the late Jeanne Brown Wright of Marietta, Georgia, they had two children, three grandchildren, and several great grandchildren.

Pic: Wright and his wife, Jeanne