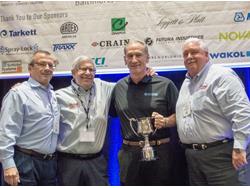 Recipients of the award must demonstrate the highest standards for training Fishman’s sales team, its customers and general contractors in the proper use of the vendor’s products. They must also provide superior marketplace support for those products.

Fishman has also recognized Doug Mayeux, regional sales manager at Futura Industries, with the 2018 Fishman Spirit of Excellence Vendor Representative Award. He was cited for his in-depth knowledge of Futura products and outstanding service to Fishman, both of which have contributed to the firm’s growth. Futura Industries is the largest manufacturer of aluminum flooring trims in the U.S.

Two Fishman team members have also been honored for their contributions to the company’s success. Scott Woodson, territory business manager for central Pennsylvania, was named Fishman’s 2018 Business Manager of the Year based on exceeding his sales goals last year. In addition, Bill Mabeus, Fishman executive vice president, was recognized with the inaugural Fishman Hall of Fame award for unparalleled sales leadership, which he has exhibited over his more than three decades with the firm.

The awards were presented at Fishman’s annual sales meeting held April 15 to 17 in Baltimore, Maryland. Thirty-three vendors and more than 40 members of the Fishman sales team participated in the event.