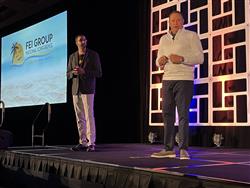 "We've not slowed," he says in regards to market activity. "Most of our members have backlogs to get them through the first half of 2023, and many through the second half of 2023."

Labor challenges are slowing the homebuilding process. Holland and Howerton report that labor is the biggest problem the industry faces--though all those backlogs are a silver lining.

Qualified labor is a personal concern for the group's members as well. "If we'd gotten all that material on time the last 12 to 18 months, we wouldn't have had enough people to install it," says Holland.

Members used the conference, which started October 26 and ends today, to network strategies, and hiring was the main topic, according to Howerton. He and Holland cite the group's transparency in such regards as the biggest benefit members report.

With the homebuilding industry barely keeping up with new demand, let alone the critical housing shortage that already exists, the two leaders are cautiously optimistic about what's to come. Though they are beginning to see strategies like builders buying down interest rates and buying land just in time for construction.

Howerton notes that the group's members consistently outperform the market, even during slowdowns. "Almost every member says they feel better prepared," he adds, citing lessons stretching back to the 2008 recession. "They feel their business is better equipped.

"If I heard anything overarching this week, it's that, 'We're not going to overreact.'"

The next conference will be held in San Antonio in October 2023, dates to be announced.

In June 2022, FEI became part of the National Marketing Group.