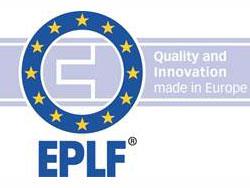 Bielefeld, Germany, June 14, 2019-The General Assembly of the European Producers of Laminate Flooring Association (EPLF), taking place at Antwerp/Belgium on June 5 and 6 hosted by the Beaulieu/BerryAlloc Group, elected a new executive board.

The executive board: Max von Tippelskirch as president, Ruben Desmet as vice-president and Eberhard Herrmann as member of the board. Georg Kruse (Windmöller) was re-elected as auditor.