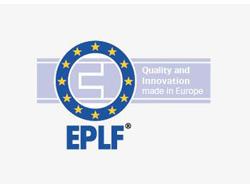 Bielefeld, Germany, June 20, 2018-On May 16 and 17, around 70 attendees gathered in Viken, Sweden for the Annual General Assembly of the EPLF e.V. (the Association of European Producers of Laminate Flooring). The meeting was hosted by associate member Välinge Innovation Sweden AB.

After 16 successful years at the head of the Association, Ludger Schindler (MeisterWerke Schulte) stepped down from his position and members unanimously elected former Vice-Chairman Paul De Cock (Unilin) as the new EPLF President.

Viken marked the end of an era for the EPLF: after 16 years in office, Ludger Schindler (MeisterWerke Schulte) was no longer standing for re-election. A dedicated President, he has led the Association (which is now 24 years old) with a great deal of personal commitment, keeping it successfully on track. Mr Schindler has given great impetus to the further development of the EPLF (recent examples are the Innovation Forum “Laminate 2020” for members, and the EPLF Innovation Manifesto), thereby setting the Association’s future strategic course. Ralf Eisermann (Windmöller GmbH), formerly a fellow member of the Executive Board and a long-term business associate of Mr Schindler, gave a witty tribute speech at the meeting in honour of the outgoing President.

One of the strategic courses of action discussed at the members’ meeting was the implementation of an important joint project-the founding of a European Floor Coverings Association (EuFCA) in Brussels. This is to be made up of ECRA (European Carpet and Rug Association), ERFMI (European Resilient Flooring Manufacturers' Institute) and MMFA (Multilayer Modular Flooring Association).

After a positive vote within the other three associations, EPLF members also unanimously granted their new Executive Board a mandate to establish the “EuFCA” EU umbrella organisation. In addition, Paul De Cock announced that the EPLF will relocate its Head Office to Brussels in the course of 2019, stating: “As the EPLF is a European interest group, being located in Brussels will be advantageous for our intensive lobbying.”