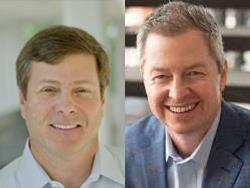 Kelley Fain will assume the role of executive vice president of Shaw’s commercial division, effective June 1. Enck will stay engaged with Shaw’s business and support Fain’s transition through September 1. At that time, Enck will transition to retirement, enjoying his health, family, personal projects and traveling.

“Doug has been a tremendous leader at Shaw, consistently prioritizing customer experience, championing innovation, developing outstanding teams and advocating for diversity, equity and inclusion within our organization,” states Tim Baucom, Shaw's president & CEO. “He has made a significant and lasting impact both within our commercial business and at the enterprise level. Doug has many professional accomplishments to be proud of, and he will leave behind an impressive legacy with the commercial division well positioned to take share as the market recovers.”

In December 2020, we did a Focus on Leadership interview with Enck.