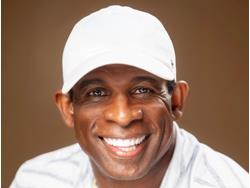 The football coach and legendary football and baseball star is set to kick off the first evening of the event, sharing his unique perspective and leadership experiences with the group. His talk will be available to both in-person and virtual attendees.

“Coach Prime” is currently the head football coach at the University of Colorado. A member of the Pro Football Hall of Fame, a two-time Super Bowl champion and eight-time Pro Bowler, Sanders played 14 years in the NFL for the Atlanta Falcons, San Francisco 49ers, Dallas Cowboys, Washington Commanders and Baltimore Ravens. He is the only person in professional sports history to play in the World Series and the Super Bowl. Since retiring from professional sports, Sanders became an analyst for CBS Sports, and NFL Network, and now offers his insights and opinions on a variety of television shows, including Coach Prime, a recent docuseries on Prime Video which follows Sanders and his college football journey.

Sanders will be a part of Sunday night's "TotalWorx Tailgate.”