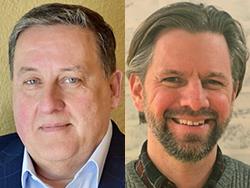 Crossville, TN, June 29, 2022-Crossville has announced two promotions within its sales organization. Tom Kettering and Anthony Coggins are both expanding their roles as directors of sales for their respective geographic regions.

Kettering, previously a Crossville divisional manager, has been promoted to director of sales–Midwest/East. In addition to his existing responsibilities overseeing Crossville’s independent distribution division in the Midwest/Northeast, Kettering will now lead the sales efforts for the Southeastern Distribution division. Kettering is an experienced sales manager with a demonstrated history of success in the tile and building products industry. In his lengthy tenure with Crossville, he has established himself as an innovative leader who’s adept at creating and executing sales and business strategies to grow market share. Prior to joining Crossville, he served as the Western division sales manager for Interstate Supply Company and then as director of commercial sales for ISC Surfaces.

Coggins, previously regional sales manager for Crossville Studios–Mountain, has been promoted to director of sales–West/Mountain. In his newly expanded role, Coggins assumes the sales leadership responsibilities for Crossville’s Western independent distribution division. He will also continue to lead the sales efforts in the Studios Mountain region. Coggins has been a part of the Crossville Studios team for 19 years in various roles of increasing responsibility. He began his Crossville career in the Charlotte, North Carolina branch and worked his way up to residential and A&D sales positions, as well as branch manager. Five years ago, Coggins relocated to Denver, Colorado to lead the outside commercial and residential sales teams in the Studios Mountain region. Since his arrival in Colorado, his guidance has played a pivotal role in revitalizing the business in the region.