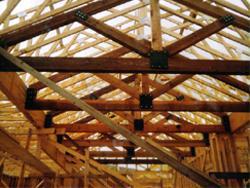 New York, NY, October 6, 2021-Shortages of key construction materials are forcing some builders and contractors to turn to substitutes and hunt for alternative suppliers as they rush to meet high demand for new housing, reports the Wall Street Journal.

“Construction companies are looking for replacements and new sources for everything from wood paneling to ceiling joists to pipes, saying that potentially higher costs and added complications to design and construction can be preferable to putting a project on hold for months while waiting for planned supplies.

“Supply shortages stem from a series of supply-chain disruptions hitting industries around the world this year, from port congestion in Asia and the U.S. to labor shortages at factories. Heavy storms in Texas and Louisiana have also slowed production of some building materials, while semiconductor shortfalls have made appliances harder to secure.

“Parker Young, president of Straub Construction in Shawnee, Kan., said he switched to different insulation materials after storms in Texas earlier this year made it difficult to get some types of petroleum-derived roof insulation boards, adding about $20,000 to costs for two apartment building projects. Waiting for the boards would have added six to nine months to the 14-month projects.

“‘It’s unprecedented,’ Mr. Young said. ‘I’ve been in the industry for 30 years and never seen anything like this. I’ve learned more about refineries and resin plants than I ever care to know.’

“The shortages and substitutions come as tight inventories of homes for sale in the U.S. appear to be crimping sales amid surging demand that began late last year. The S&P CoreLogic Case-Shiller National Home Price Index, which measures average home prices in major metropolitan areas across the U.S., rose 19.7% in the year that ended in July, the highest annual rate of price growth since the index began in 1987.”