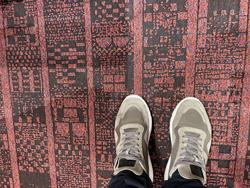 New York, NY, September 19, 2022-Consolidated Flooring, a commercial flooring contractor, hosted its second ConsoCon show last week at the Altman Building in New York City’s Chelsea District. The first show, held in September 2019, was to be the launch of the annual event, though the pandemic disrupted the cycle.

A lot of the product from flooring manufacturers was unveiled over the summer at the Chicago NeoCon show, though there were also some new products, like Välinge’s commercial Woodura and Tarkett’s Discovery, an education-focused carpet and LVT line that was actually launched at the show. But the biggest surprise may have been Germany’s Anker, which displayed a range of high-end woven products made of Econyl on Jacquard looms.

Attendees were largely made up of designers from a range of A&D firms, notably including Gensler, TPG, Ted Moudis, Fogarty Finger, HLW and MKDA.

Like the event in 2019, the show was less about selling and more about renewing and celebrating relationships and partnerships. A generous buffet and full bar kept the atmosphere lively and dynamic. And those in attendance were enthusiastic about the event and looking forward to doing it again. At the show, Dave Meberg, president and CEO of Consolidated Flooring, said that, absent more disruptions, ConsoCon will be an annual event.