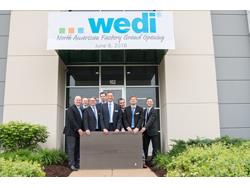 Batavia, IL, June 25, 2018-Wedi North America, a German based shower panel system manufacturer, celebrated the official grand opening of its factory in Batavia, Illinois, along with a ribbon cutting ceremony to mark the landmark event.

Wedi management and staff, local and state officials, and Wedi customers, partners and supporters attended the ceremony. Guests also had the chance to tour Wedi’s new state of the art production facility on American soil.

The new facility, which serves as both a corporate office and factory, has created a substantial number of new jobs for the local community. Celebrating the start of domestic production, Wedi management continues on its path to implement its defined growth and internationalization strategy, which includes this investment in Wedi quality products proudly made in the U.S. The production capacity is designed to cover the demand in the North American regions in the coming years.

Reflecting on Wedi’s new venture in the U.S., Bastian Lohmann, Wedi North America’s director comments, “Here in the upper American Midwest we not only found the environment for state of the art production, the people and technology needed, but also the vendors for raw material and complementary product.”