Carpet One Members Report Uptick in Business in January 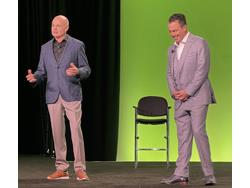 Phoenix, AZ, January 11, 2023-At this week’s CCA Global winter convention in Phoenix, Arizona, John Gilbert, president of Carpet One Floor & Home, noted that it appears some pockets of the country are in a recession, while others are still booming.

At the same time, Gilbert reported that conversations with members indicate that there is a pulse returning to business in many markets, with walk-in traffic increasing, noting that while December was slow, January was a bit stronger for many.

Gilbert also reported that many Carpet One members are in great financial health, so they should easily weather a downturn, should one materialize.

In addition, Carpet One used the meeting to continue rolling out its Retail 2.0 system. The system was originally tested in ten stores with soft surface only and is now in 100 with a hard surface program as well. By the end of the year, the group hopes to have it in 1,200 locations.

Rick Bennett, CEO of CCA Global, stressed during his time on stage that the Retail 2.0 system only works if members reduce the number of displays within the showroom that are not part of the program.

The system was created to simplify the buying process for the consumer and to reduce purchase time.