Burnett, Gheesling & Jennings to be Inducted into WFCA Hall of Fame 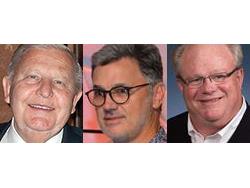 Burnett and Jennings’ formal induction into the Hall of Fame will take place at the Spring WFCA board of directors meeting in San Diego, California. Gheesling will be honored in September during his Celebration of Life in Georgia.

Reg Burnett, who passed away in 2013, was a visionary leader, internationally known carpet expert. Born and educated in England, Burnett moved to the United States in 1957. During the next 15 years he studied synthetic fibers and worked in the American carpet and man-made fiber industry. He founded the RBI Carpet Consulting business in Dalton in 1967 and as its reputation grew internationally, changed to RBI International in 1969.  Under Burnett’s leadership, the company grew to a staff of 22 employees working with more than 250 companies around the world. He remained managing president until his retirement in 2002.

With a career spanning over 50 years, Burnett acurately predicted major shifts in the industry decades before it happened, he predicted the industry’s consolidation from over 400 manufacturers to fewer than 50, that three or four mega mills would dominate, and vertical integration of many of the medium and large mills.

Burnett authored over 100 technical articles that were published in industry trade magazines and was a popular speaker on industry topics. Burnett  was a member of the Carpet & Rug Institute (CRI) and Carpet Manufacturing Marketing Association (CMMA), and was active in the Dalton Rotary Club.

Gheesling, who passed away unexpectedly in November 2020, began his career selling industrial trucks before joining Mohawk Industries, working for Abbey Carpet and Floor and ultimately co-founding FloorExpo, today known as FEI Group. He remained president and CEO until his death.

In 1988 along with colleagues Tim Joyce, Andy Hogan, and Randy McNatt, Dave founded FloorExpo to serve the residential contract market in the 1990s. What started as a focus just on flooring eventually expanded into a broader list of interior finishes and most recently roofing as well.

In addition to his career focus, Gheesling had an abiding passion for meteorites which led him to giving countless hours to educate children in the classroom about space. He was a member of the International Meteorite Collectors Association (IMCA), a board member/director at Tellus Museum, a founding member of Meteorite Association of Georgia and founder/board member of the Scott G. Mishkin Foundation.

Tom Jennings is a retail expert and served as an empolyee of the WFCA until his retirement in 2019.  He has spent more than a decade travelling the country, teaching store owners, managers and staff the nuts-and-bolt skills they need to run successful retail businesses. He knows what it takes because he spent 35 years in the volatile trenches of retail.

Jennings was born into his family's retail business, Bud Jennings Carpet One, which he sold in 2006. He served as president for 20 years following his father’s retirement.  Jennings branched out on his own as a professional trainer, speaker, and consultant before joining the WFCA in 2013 as vice president of professional development where he remained until 2019.

Jennings co-founded the first local association of American Flooring Association (AFA) in Kansas City (HAFA) in 1980. Jennings has served as an advisor advocate for the International Certified Flooring Installers Association (CFI) in Kansas City, which the WFCA now owns. He is the recipient of CFI’s Chris Davis Award in 2014 for his dedication to promoting quality flooring installation.