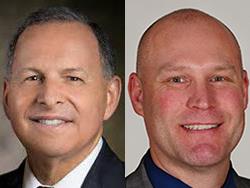 Omaha, NE, April 14, 2021- In the next step of a long-term succession plan Irv Blumkin, CEO of Nebraska Furniture Mart (NFM), is transitioning to a new role as chairman of the company founded by his grandmother Rose Blumkin in 1937.

Boldt joined Nebraska Furniture Mart in 2002 as a warehouse manager and rose through the company ranks, becoming store manager of the Des Moines store, appliances and electronics general sales manager in Omaha, store director of the Kansas City store, and most recently president and COO.

In his new role as chairman, Blumkin will be responsible for enterprise-level strategy and visioning, along with Boldt and will also focus on mentoring at the executive level.