ACWJC Continues to Push for Tariff Exemption for LVT in DC 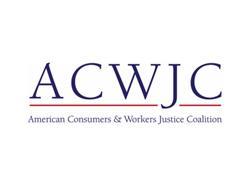 Washington, DC, December 3, 2018-A voice against the imposition of up to 25% tariffs on Chinese flooring imports was in full force in Washington as the American Consumers & Workers Justice Coalition (ACWJC) met with senators, congressmen and their staffs in Washington last week regarding the Chinese tariffs in general and their potential effect upon the flooring industry in particular.

The coalition effort was led by Harlan Stone, founder of the ACWJC and president of the Multilayer Flooring Association (MFA).

The overwhelming majority of elected officials in Washington the Coalition met with last week are opposed to increasing tariffs from 10% to 25%. Virtually every meeting (over 95% of them) ended with an understanding that LVT should be excluded from the entire tariff process and that should be done through an exclusion process. Many members of Congress had either already publicly declared or are willing to stand up on behalf of the ACWJC to explain why an exemption process is necessary and why delaying the implementation for any increased tariffs is essential to continued economic expansion.