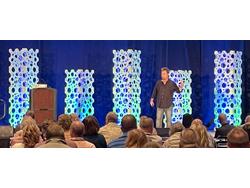 Charlotte, NC, March 2, 2022-The Abbey Carpet & Floor and Floors To Go 2022 convention is underway now at the Charlotte Convention Center in Charlotte, North Carolina, running from March 1 to 5.

The theme of the event is Focus on the Future.

CFO Ted Dlugokienski welcomed attendees and reported that the organization made a 24.8% sales increase in 2021 as a collective group.

CEO Phil Gutierrez followed, contrasting member growth with the overall U.S. flooring store sales increase of 17% for 2021. Gutierrez also spoke about looking ahead, rather than back towards the struggle of the pandemic years, noting that inflation will be a significant factor in the 2022 market.

Dave Hardy, EVP of merchandising, took the stage next, reporting that the group is introducing 32 new private label collections for members at the event. Hardy also reported on the group’s top-producing programs and brands and introduced new suppliers for 2022, which include Naturally Aged Flooring from Harris Flooring Group; Nature’s Carpet, sellers of tufted wool carpet); and B&F Ceramics, which services the eastern U.S. with its own fleet.

Following the leadership team, Jim Knight, author and former training and development director for Hard Rock Café, took the stage and talked about “leaderships that rocks.”

Bill Wilson, vice president of merchandising, reports, “We wanted to amp up the energy this year and bring some more excitement, so we found speaker who could do that. [Knight] had a lot of great messaging, and we selected everything, from the music that played in the opening event, to match his energy.”

In addition, Wilson, noted that, “Aside from getting back together,” after a year off due to Covid, he was most excited about the company’s, “marketing programs, which are so strong in what is offered, and members are taking advantage of them. Our lead generation tool advances the control that a member has from initial inquiry through the entire buying cycle, from assigning the lead to managing. It provides visibility to the customer journey. Members have asked for that, and we are delivering.”

Wilson reports that he was “pleasantly surprised with the event’s attendance. It’s so new being back together. Some people are still afraid to travel, and we guessed we’d have lower attendance than we actually have. And we have more members still coming in today.” The city’s mask mandate lifted the first day of the event-March 1.

Wilson notes that, traditionally, members have done about 80% of their annual buying at the convention, and that, while 2021’s virtual convention was a success, it could not replace the opportunity to see new product in person.

Member Allen Thomas of Young Interiors Floor Center, based in North Myrtle Beach, South Carolina, has been to the Abbey/Floor To Go at least ten times previously and reports that the opening event is always his favorite part, noting that Knight was a very good speaker.

This was Michelle Cochran of Fort Worth, Texas Floors to Go’s first convention. She believed the event to be “well-orchestrated thus far” and reported that she was most excited about the exhibit portion of the event, which started Wednesday with a group mixer, as well as the informational break-out sessions.