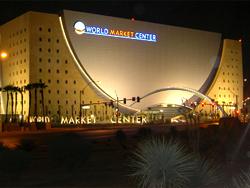 , , June 5, 2007-- is readying its new on-site recycling center and refuse system for the Summer 2007 Market as an encore to its successful eco-efforts during the Winter 2007 Market, when more than 70 percent of all refuse was recycled.

he bi-annual Las Vegas Market at is the country’s largest new trade show for home furnishings industry suppliers, manufacturers, and retail buyers. he downtown complex is currently home to two massive permanent showroom buildings and on-site pavilions, which consists of more than 3.25 million square feet, with plans that call for 12 million square feet of exhibition space to be built over six years.

With nearly 600 exhibitors shipping product to their showrooms throughout the year the volume of packaging material alone is massive—especially during Market-time.

he first phase of ’s on-site recycling center and refuse system was launched prior to the Winter 2007 Market last January, when more than 70 percent of all refuse was recycled. During a six-week period, recycled 350 tons of cardboard alone.

Long-time industry expert Peter Frigeri of Expo Ease recently launched trade publication Expos Going Green, which covers sustainability in meetings and exhibitions. “When I found out that World Market Center was recycling I thought, ‘hat’s awesome!’” he said, adding that becoming more environmentally conscious as an industry centers on small practices being started and gaining momentum. “It can make a large impact if everyone does just a little bit,” said Frigeri. “And, for any building or show, recycling is probably the best place to start.”

During the Winter Market, had a recycling baler and a polystyrene (foam) extruder in operation, which recycles the volume of foam by 98 percent. Additional equipment is being put in place prior to next month’s July Market to further advance the on-site center’s output and efficiency.

also is being applauded for its environmentally conscious efforts by the Sustainable Furniture Council, a non-profit industry association committed to promoting sustainable practices within the home furnishings industry.

“Our organization is seeded in the fact that all of us in the furniture industry have to take responsibility and do what we can,” Executive Director Susan Inglis said. “I’m glad is recycling and doing what it can, and I’m delighted it’s doing something the people of can be proud of.”

Gerry Sawyer, Chief Operating Officer for , said the on-site recycling center and refuse system helps accomplish ’s goal to recycle a high percentage of all waste produced. “Not only are we reducing stress on landfills, but we are being a good neighbor to the community,” he said, adding that World Market Center is helping to reduce emissions by bringing recycling on site and eliminating the need to transport refuse from World Market Center along city highways and surface streets.

“ has the potential to become one of the largest on-site recycling centers in ,” Sawyer said. “With the new system, we are able to dispose of materials in a rapid, efficient manner.”

he refuse system has already started paying back the cost of the equipment—not to mention preventing hundreds of dumpster loads of waste from going to Clark County landfills, according to Sawyer. “For the year 2007 alone, we expect to see total cost savings of well over 70 percent off our trash bill. When Building C comes online in July of 2008, the annual cost savings due to the refuse system will be in excess of $300,000.”

Furthering its commitment to initiatives that support the environment, Las Vegas Market officials last week announced the new Living Green Pavilion, set to make its debut at the Summer Market, July 30 – August 3, 2007.  he inaugural Living Green Pavilion, a partnership with Sustainable Furniture Council, will highlight the growing style and substance of eco-friendly home furnishings and will be located at Sands Expo temporary show, opening on uesday July 31.  his featured Pavilion is in addition to the many other environmentally-conscious manufacturers with permanent showrooms in ’s Buildings A and B who are also showing new products and evolving their sustainable product lines and practices.