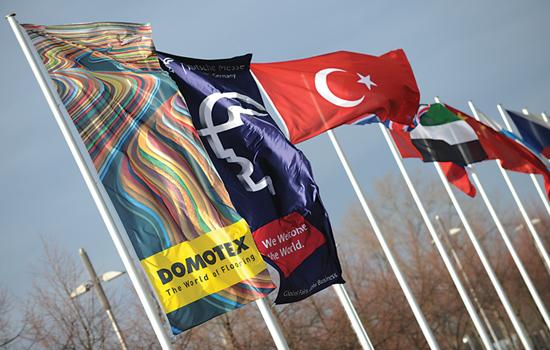 Given the recent state of the European economy, we weren’t sure what we’d find at this year’s Domotex show in Hannover, Germany. And when you go to a show that’s spread out over 12 buildings, it’s hard to discern from one year to the next how attendance is tracking.

Now that it’s over, we’ve learned that attendance was up double digits to 45,000 from where it stood at 40,000 for the last couple of years. Granted, attendance is not the sole measure of a show’s efficacy but we believe it is a commentary on the global outlook for flooring since this is the global flooring show—where 83% of the attendees and two-thirds of the exhibitors come from outside of Germany to attend. This show also covers both residential and commercial flooring and the only category that isn’t well represented is ceramic tile.

Change is usually embraced with a varied sense of enthusiasm and this was the case with Domotex’s exhibitor layout changes—some liked it and others didn’t. Practically every hall was rearranged this year, initially to accommodate the new Wood Flooring Summit and the higher demand for machine made modern rugs—rug exhibition space grew more than 30%. But once show manager Deutsche Messe started moving things around, it decided to rearrange all the product groups and move similar products adjacent to each other as a convenience to the attendees, resulting in a wholesale shift for practically every exhibitor. This show is held at the largest exhibitor fairgrounds in the world—so large, in fact, that buses run throughout the complex to make it easier to get around.

Another change this year was in the show management leadership. Stephan Kuhne, who has led the show for several years, left Deutsche Messe last summer and the interim leader for this year is Dr. Andreas Gruchow. But starting in April, the new leader for Domotex will be Dr. Jochen Köckler, who has spent many years in the exhibition field.

Domotex shifted the spotlight of this year’s show to its Wood Flooring Summit. While none of the big U.S hardwood producers was on hand, many of the European and Asian suppliers had a booth. Amorim, Kährs, Lamett and Power Dekor were some of the bigger companies with exhibits. To add more fanfare to the summit, Domotex held an evening event—complete with band—on the opening night of the show. This took the place of the more traditional German beer party that Domotex has hosted for years in its Stroh house.

Among the interesting colloquialisms about this global flooring show is the word it uses to describe hardwood—”parquet”—and the general use of the word “carpet” to describe both rugs and carpet. Beyond that, it’s very easy to get around at this show, even if the only language you speak is English.

Several U.S. based companies had booths at this year’s show. Mohawk came back with a large exhibit focused on carpet after taking last year off. Beaulieu of America, Masland, Styron and Mannington Commercial were also back with their own stand-alone exhibits. In addition, two American pavilions were prominent at the show, one sponsored by Wanda Ellis’ American Floorcovering Association and a second sponsored by the National Wood Flooring Association.

Mohawk’s large presence at the show came as no surprise, especially in light of its ongoing diversity both from a surface category and geographical standpoint. We would not be surprised to see more international expansion for Mohawk as the global economy sees more stability. Many of the American manufacturers we spoke with, like Beaulieu of America and Mannington, see Domotex as a meeting point for all of their export partners around the world. Even though the show is in Western Europe, Domotex gives them access to the Middle East, Africa, South America, the former Soviet countries and even the South Pacific.

While the Domotex show in Hannover continues to be the largest flooring show in the world, Deutsche Messe also hosts flooring shows that carry the Domotex name in China, the Middle East and, new for 2012, Moscow, Russia.