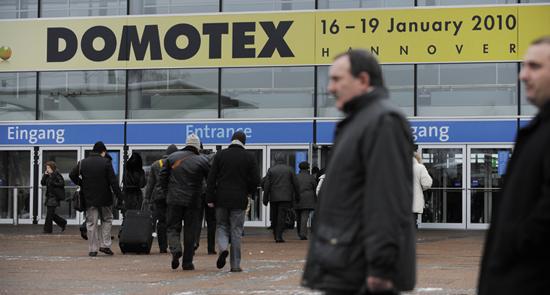 Every January, Domotex, the world’s largest flooring show, is held in Hannover, Germany. For those that haven’t been, I strongly recommend this show—if for nothing else than to see the styling differences for flooring in the rest of the world.

Each year roughly 1,400 exhibitors set up their display in anticipation of 40,000 visitors from all over the world. The show takes place on a huge gated fairground with 23 buildings, but the Domotex show is confined to 12 halls—covering roughly 1.5 million square feet. The show is organized by surface type so all of the carpet is grouped together as is the hardwood, laminate, area rugs, and resilient flooring. Remarkably, ceramic tile is not represented at this show—most likely due to the strength of the tile-only shows in Italy and Spain.

Held about two hours north of Frankfurt in Hannover, this mega flooring show definitely has an international flair. Nearly 60% of the attendees come from outside of Germany and the exhibitors come from over 60 different countries.  Conversation is not difficult because nearly everyone can speak English as a second language. Should you decide to go to Domotex next year, I suggest you plan to spend at least two days at the show. The show starts on a Saturday and runs through to the next Tuesday.

This show is a little like Surfaces, NeoCon and FloorTek all rolled into one, in that it caters to the residential and commercial sectors as well as to the equipment and component suppliers—but unlike NeoCon, it’s only about flooring. The attendees at Domotex can be divided into four groups: retailers and wholesalers make up the largest group, followed by architects and designers, installers and contractors, and lastly manufacturers. This year, there were 22,600 visitors from abroad, and about 60% of them were from Europe. Also this year, there was a 30% increase in the sections devoted to parquet and laminate flooring, as well as cleaning and application technologies.

European tastes often run counter to American tastes. A lot of products at Domotex had vivid colorations—bright greens and oranges and other saturated hues—and the gigantic textures of the showcased rugs in Hall 3 would probably not lend themselves to the U.S. market. By the same token U.S. designs are not widely accepted in the European market—especially in the residential sector. Our heavier weight carpet in more low key colorways does find traction in markets like Russia, India, Mexico and Australia. Commercial styling, on the other hand, does not vary as much by country.

Commenting on attendance this year, Stephan Kühne, the ranking official for Domotex said, “The industry is starting 2010 on a confident note and the success of Domotex 2010 provides an indication of an improving economic climate.”

Mohawk was clearly the largest American company to have a display at Domotex. We also saw Armstrong, Mannington Commercial, Masland Contract, Beaulieu of America, Swiff-Train and Mullican. From the supply side, we saw most of the major equipment, carpet backing and adhesive suppliers.

Every year, the show gives designer awards in the Contractworld area of the show. As I mentioned earlier, flooring styling trends vary greatly across the globe but more so on the residential side than the commercial side.

For a look at the award winning entries from Contractworld, see the March 2010 issue of Floor Focus Magazine.