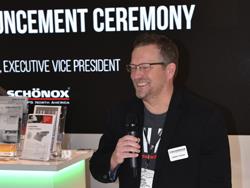 Las Vegas, NV, February 2, 2018-The winners of the HPS Schönox Worst Subfloor Contest were announced during a ceremony at the International Surfaces Event in Las Vegas, Nevada.

HPS Schönox’s annual Worst Subfloor Contest seeks to answer the question, “What lies beneath?” Many installers face nightmare scenarios when they start new project. They choose to partner with Schönox materials to tackle those extreme subflooring challenges. They are encouraged to take photos during the process and submit these photos along with description of Schönox products.

All identifying information was removed from the entries and only project photos and notes were available so the judges could remain impartial. The judges were asked to evaluate the projects based on the severity of the original subfloor’s condition, the skill and attention to detail taken in executing the project, and the quality of the finished subfloor.

First, second, and third place winners were chosen and were awarded prizes including Schönox dollars, a trip to Las Vegas, Apple watches and YETI coolers.

The winning companies were as follows: