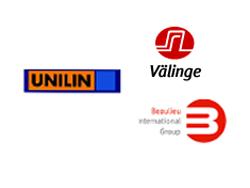 , April 17, 2007--Unilin and Välinge have executed an agreement which puts an end to most worldwide litigation between the companies and creates a framework that allows easier access to the respective technologies for future licenses. he agreement was finalized April 10.

Separately, Unilin said that it has reached an agreement with Beaulieu International Group and Välinge Innovation AB to settle their global patent dispute. his puts an end to many years of litigation relating to the infringement and validity of the respective patents.

he Unilin, Valinge agreement relates to glueless joining systems for hard flooring panels. his agreement puts an end to almost 25 legal cases over the validity and infringement on the respective patents in , , , the , the and the

Unilin and Välinge have also created a framework that allows for future licenses to cross license patents for respective glueless technologies. Both parties will be able to more aggressively develop and market glueless systems without patent disputes.

his agreement ends years of conflict and enables the combined companies to strengthen and protect their patents.  here remains certain exceptions to this agreement which have not been resolved.  here may be continuing litigation with third parties to resolve these.

Both the Unilin Group and Beaulieu International Group have marketed laminate flooring with glueless systems since the late nineties. hese systems are protected worldwide by various patents.

Beaulieu International Group was, as a licensee of Välinge, involved in dozens of legal proceedings with Unilin regarding alleged infringements on the respective patents. Both companies have now reached an agreement to settle all their legal cases worldwide. his agreement settles approximately 25 current legal cases in the , , , the , , and the .

his agreement protects the value of the respective patents and it offers to each party the chance to maximize its innovations.

Unilin said is determined to continue the intensive enforcement of its patents against any remaining infringers in the market place, by creating significant liability for both the seller as for the buyer.