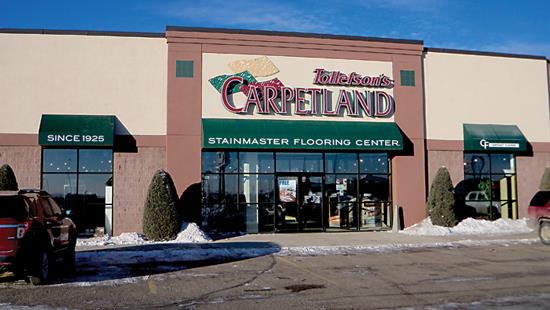 Tollefson’s Retail Group is the sort of business empire that many retailers dream of building. To date, the 90 year old corporation has supported four generations of the family by both staying true to its roots and adapting to the needs of the market. With 11 flooring stores under three different brands, as well as 11 Slumberland furniture locations, Tollefson’s Retail Group is a testament to how a great business is built on more than just great strategy; zeal plays a substantial role.

BUILDING A BUSINESS AND A LEGACY
Though the history of a flooring business isn’t always a riveting tale, the story of how Tollefson’s has become what it is somehow manages to carry both charm and insight. Mark Tollefson is co-owner of the Tollefson’s Retail Group and CEO of floorcovering operations. Mark’s grandfather Ole Tollefson was a farmer who supplemented his income by working at a furniture store through the winter months. After a few years, the owner of that furniture store asked Ole if he had an interest in purchasing the location, which Ole did on April 30, 1925. Ole’s store wasn’t what we think of today as a furniture store. “It sold wood stoves, area rugs, linoleum, sewing machines, basically anything he could make a buck on,” explains Mark.

In 1953, Mark’s father and uncle bought the store from their father, and, in the early ‘60s, when tufted nylon carpet hit the market, the pair decided that it was time to open a standalone carpet store, which became Tollefson’s Carpetland, a full service flooring location with lots of sample and some inventory.

A second flooring brand, Carpet Garage, was established by the pair in 1973; this was a no frills cash-and-carry, inventory-only business that guaranteed good prices but offered no special ordering. “That was the apex of the carpet industry,” explains Mark, “when there were two or three hundred carpet mills. They were everywhere. Back then, mills weren’t as good at making carpet, sometimes it would be narrow or have streaks—not significant problems and a great opportunity. At the time, we also sold some sheet vinyl. We used to buy sheet vinyl by the pound, for something like $0.19. Some of it was flawed. We’d get a load in, sort through it, cut the good stuff into remnants and throw the rest in the dumpster.”

Mark and his cousin Roger bought the business from their fathers in 1988 and went on to open 19 more locations for a total of eight Carpet Garages, two Tollefson’s Contract Flooring locations, one Tollefson’s Carpetland and 11 Slumberland furniture stores. Today, Mark runs the flooring business, and Roger the furniture side. These businesses stretch from Lake Superior to the Rocky Mountains, and a fourth generation is now toiling away at Tollefson’s: Roger’s daughter Emily manages the Minot Slumberland; her husband, John Mackner, is vice president of operations—as well as Mark’s right-hand man—and will eventually take over the flooring business; Mark’s son Brandon manages a Carpetland store; and Roger’s son Brent manages another location. Says Mark, “The business has grown so much that it would be tough for just one person to run it, so it’s nice that there are four of us involved [as leaders].”

One of the things most remarkable about this story is Mark’s telling of it. He’s proud. For Mark, this isn’t just the story of his business but the story of his family. Some people have trouble recalling their children’s birthdays, but Mark can, with barely a pause, tick off the year that each of his 11 flooring stores was established. And it is with emotion in his voice that Mark discusses studying the ledgers from Ole’s original store, how a dining set cost $12.50 and how Mrs. So-and-so put $2.50 down on a set and made a dollar payment each week until the table and chairs were hers. In Mark’s voice, it’s clear that this business isn’t just about making a buck today; it’s about honoring the Tollefson’s who came before and continuing to build something for the fourth generation of Tollefsons and the Tollefsons yet to come.

KNOWING THE CUSTOMER
None of the Tollefson flooring locations are situated in large cities, and, for the most part, the customer base is more rural and accustomed to long, harsh winters. “People here are practical and want durability,” says Mark. “Hardwood is beautiful, but you can’t come in [to a hardwood floor] wearing your boots from taking care of the cows.” These facts have a significant impact on Tollefson’s offering. LVT is popular for its durability, and carpet is an easy sell because it offers warmth underfoot. Ceramic, of course, isn’t popular because it’s cold, and underfloor heating systems are just too costly for the typical Tollefson customer.

The customer base impacts the business model as well. John characterizes the business’ greatest strength to be the fact that customers can walk in, buy flooring and take it home today. The Carpet Garage locations have the largest selection of on-hand goods in their markets. In carpet, Mark and John typically stock the three colors with the greatest appeal. In LVT products, they carry around 15 stocked colors. Mark refers to this as the 80/20 approach, choosing the 20% of products that will bring in 80% of the volume. “Each Carpet Garage is about 20,000 square feet and filled with inventory,” says Mark. “That’s our concept. We started with distressed good, which just aren’t available today at good savings. To find that edge, we buy truckloads [for which] we can negotiate better savings and pass those along. We have bridged the gap between the traditional flooring store and the big box. We offer the customers expertise: intelligent, educated salespeople but with great pricing.”

In addition, Carpet Garage stores don’t arrange installations for the customer. “At Carpet Garages, we have a list of installers who we feel are competent. When the customer comes in, we refer them to the list, which is broken down by flooring category, and the customer gets the quote and sets up the install themselves. That saves them money because there is no mark-up on labor. It’s one extra step for them, but they want to save that money.” The Carpetland location, on the other hand, does arrange installations for its customers.

LOOKING FORWARD
It’s clear that Tollefson’s has a strong leadership team in place for moving ahead. However, the plan regarding future locations isn’t as clearly laid out. “Our biggest challenge is finding markets where our model is new,” explains John. “There are more and more stocking dealers, more stores like us. To differentiate ourselves will be harder in the future.”

One area that Mark sees as an opportunity is western North Dakota, where the Bakken formation has created an oil boom that has attracted thousands of workers, causing local populations to skyrocket. “We always have our eyes open,” Mark says. “There are some smaller markets there [in western North Dakota] that we wouldn’t have considered five or seven years ago but look more attractive today. However, those markets live and die by the price of oil, so it’s a risky proposition. Plus, the price of land there is crazy, and the towns are still only 10,000 to 15,000 people. It all depends on the opportunity.”