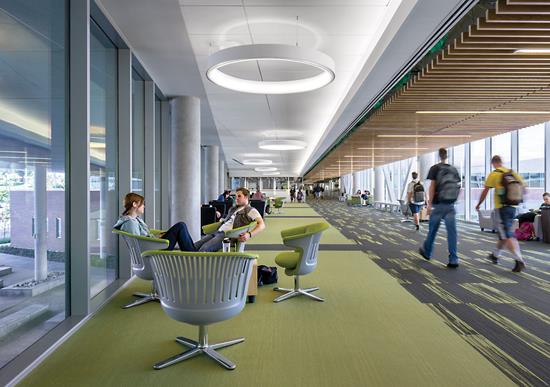 According to this year’s crop of surveyed designers, flooring design is in the midst of transformation—of pattern, color, texture and overall theme—shifting away from many of the traditional looks. The major influences are coming from LVT, carpet tile and porcelain, the three biggest flooring categories in the commercial market, and they are helping to move design into uncharted territories.

The other major driver has been an increased sophistication on the part of architects and designers in terms of creating spaces designed for the needs of the specific clientele. For instance, evidence-based design is transforming healthcare and senior living applications, and Gen-X and Millennial philosophies have impacted the design of corporate spaces, leading to more informal and collaborative spaces, for instance. Traditional hospitality design is shifting toward modular installations. The elevated role of branding is transforming looks across most commercial sectors. Environmental sustainability is altering the look and feel of the built environment. And, it goes almost without saying, the digital revolution has shifted everyone’s perspective, from the manufacturing side all the way to the end user.

For several years now, hard surface flooring—led by porcelain and LVT—has been gaining prominence in an expanding range of public-facing commercial applications. Up until recently, the leading trend has been toward wood looks, and that has been well received by designers, who have hitherto been unable to achieve those types of visuals because hardwood itself doesn’t meet the performance standards of many commercial applications. But now that wood-look LVT and porcelain have become fully entrenched in high profile commercial designs across just about every sector, designers have started to move beyond those prevailing trends.

It started with a shift toward blended looks like hardwood and stone or textile and concrete, which has produced some incredible visuals, but designers are increasingly looking beyond these types of designs, seeking out higher chroma colors and a wider range of visuals, as well as custom colors and patterns.

Then there’s the impact of formats. On the soft surface side, modular carpet has gone from square formats to rectangles, then planks, hexagons and other geometric shapes. LVT started with squares and planks, and now is fully embracing a much wider range of shapes, from hexagons and various parallelograms to other inventive geometric shapes. These developments have opened up the door to creative flooring installations, from traditional herringbone and box designs to more complex patterns, increasingly mixing hard and soft surface products. (FloorFocus’ NeoCon report in the July 2016 issue has more on these trends.)

This year’s surveyed designers express a need for more coordination between hard and soft surface products to give them the creative freedom to explore new designs. Firms like Mannington, which has been producing both hard and soft surface products for decades, are adept at creating coordinating programs, and the many carpet mills that have recently added LVT capabilities are quickly following suit. This could put pressure on LVT specialists, which at last June’s NeoCon show in Chicago mostly displayed hardwood visuals, while manufacturers of both carpet and LVT showed a much wider range of LVT looks, including lots of bright and colorful designs.