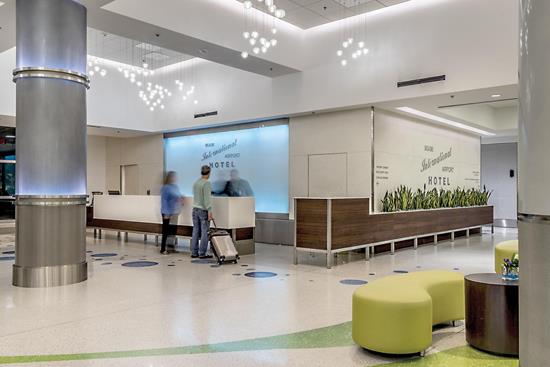 The Miami-Dade Aviation Department’s (MDAD) in-house Interior Design section was recently tasked with renovating the hotel lobby, common areas and guest rooms of the Miami International Airport (MIA) Hotel. The MDAD team was responsible for the concept of the overall design, as well as for the management of the architect of record, S&G/Heery International, and the contractor, MCM. The project resulted in the dramatic improvement in appearance and passenger experience at MIA.

The 50-year-old hotel was due for a complete makeover. The MDAD Interior Design team recognized that this property, at the very center of the airport, could become a unique introduction to Miami’s modern, tropical vibe for visitors to South Florida. They implemented a renovation concept to re-brand the hotel as a symbol of Miami’s vibrant and cosmopolitan spirit, and to elevate the hotel’s stature above the nearby competition. To establish the MIA Hotel as a competitive boutique property, the designers incorporated the use of color and light along with a bold graphic materiality—specifically in the use of imaginative terrazzo flooring that highlighted the color and light synonymous with the Miami Art Deco era.

The project included both the renovation of the terminal level lobby area and the relocation and remodeling of several concession spaces operated by the airport hotel and adjacent to terminal circulation. Additionally, in the five floors above, the guest rooms and guest room corridors received an extensive renovation, including new carpet, along with terrazzo for the lobby elevator waiting areas.

Located in the center of MIA, the hotel lobby is the pivotal point for terminal traffic and the core of intersecting systems for the entire facility. Thus, the scope of work for the new design included comprehensive investigative exploration and documentation of the existing facility and of its intricate architectural, structural, mechanical and life safety systems. The design team was charged with producing a design solution that would meet the demands of a phased renovation while still maintaining 24/7 operation of the hotel and the airport’s wider terminal functions with minimal disruption.

Work was done in sections. MOT (maintenance of traffic) plans were developed and the area was divided with temporary walls. When one area was complete, it had to be inspected before it could be reopened and the next section closed. Even the flooring was installed in sections. The design team utilized templates to be sure the flooring design continued seamlessly from one construction section to another. The entire area had to be closed and foot traffic rerouted only a few times during the project. At one point, for example, second floor offices were completely demolished in order to raise the 8’ ceiling in the hotel lobby, creating a more spacious look and contributing to the boutique feel.

The flooring materials for a terminal that welcomes more than 40 million passengers a year has to compensate for high volume foot traffic and the associated safety and maintenance concerns. A design commitment had been made to use epoxy terrazzo flooring for both the terminal and the concourses. A subtle wedge pattern in tones of grey had been established as the standard throughout.

Taking inspiration from Miami’s Biscayne Bay and Gulfstream waters, the design team developed a ribbon-like pattern that is an abstraction of kelp and the bubbles that rise naturally from the sea-floor plant. They overlaid the neutral grays of the field terrazzo with accents in the vivid blues, greens and yellows of Miami’s tropical waters. And they used the meandering pattern of the kelp to establish a pathway—an important wayfinding element—to lead the traveler into and through the lobby. Further extension of the kelp leaves into the hotel’s concession areas created a subtle marketing tool as well. The result is a highly functional floor and a true work of art.

In addition to obvious long-term maintenance benefits, epoxy terrazzo also offered the design team a very broad scope for creating a pattern and design, along with an almost unlimited selection of color. In fact, to use these flooring characteristics to their full advantage, the MIA design team literally worked hands-on and often into the night with the contractor, Creative Terrazzo Inc., placing the pattern and adding subtle shading and gradation to transition seamlessly from one color to another.

Because MIA is a public county government facility, the maintenance factors cannot be overemphasized. The floors have to be cleaned easily and often; they have to be safe and easily navigated; and they have to meet sustainable criteria (equal to LEED Silver). Of course, as a project that used tenant-funded dollars, there was also the fiduciary responsibility of selecting a product with unquestioned longevity for this heavily trafficked area.

Parameters for the selection of the guest room area floors dictated a very different solution. Nevertheless, the requirements for maintenance, long life and sustainability remained a constant.

Tremendously successful, the hotel caters to en route travelers seeking a few hours of quiet rest. Almost European in their size, the hotel rooms were originally built in 1960. The new design called for upscale finishes to help define the hotel as boutique. For flooring specification in the guest rooms and corridors, acoustics were paramount.

Carpet tiles by Interface were chosen as the obvious solution for sound absorption. Heavy gauge tiles were selected to stand up to the foot traffic and numerous rolling carts in the airport. Solution-dyed products were chosen for carpeted spaces in the hotel and throughout the airport because fumes from the planes discolor other carpet fibers over time. Bright colors for the carpet were specified, especially in the corridors, to make the spaces lively, and also to compensate for less frequent maintenance due to the 24/7 operation of the hotel.

Because moisture is a common issue in Miami, the design team tested several manufacturers’ products before specifying one, and the subfloor was tested for moisture as well, to avoid curling edges and lifting of carpet tiles.

In the guest baths, existing marble tile floors were simply polished to bring back their original luster. The team selected carpet tile with a defined graphic pattern for the corridors. The custom-designed geometry and the specification of cool colors gave both order and breadth to these elongated, narrow passageways while coordinating with the theme of the lobby. Without being busy, the bright patterns in blues and greens are complex with the express intention of breaking up the considerable corridor length. Careful pattern placement will help conceal wear paths as the carpet ages as well. Flooring was also used to define specific areas, such as the elevator lobbies, where terrazzo was specified.

The carpet tiles for the guest rooms captured the background and more relaxed colors from the corridor carpet, in a choice that is more about texture than pattern. This selection provides a transition to a more uniform, monochromatic texture in direct response to the limited scale of the spaces. Reflecting the abundant greenery of South Florida, this softly colored and minimally patterned carpet provides tranquility, both acoustically and psychologically.

Requirements for LEED certification could not be met for the project because upgrading the air conditioning system, which serves other spaces in the terminal, pushed beyond the scope of the project. Green products were used whenever possible, however, including LED light bulbs, recyclable ceiling tiles and terrazzo, which is an inherently green product. The carpet contains recycled material as well, and the old carpet was completely recycled.