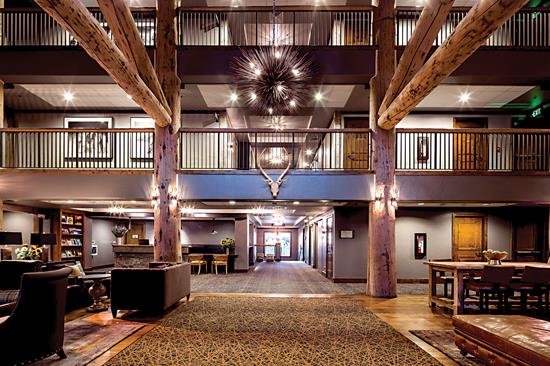 The hospitality market is booming. Revenue was up 9.1% for 2014, according to STR Global, the leading provider of hospitality data and research, and predictions are for an even better 2015. The average daily room rate hit a peak of $118.51 in October 2015, the highest it’s been since before 2008.

Hotel corporations are taking advantage of the high demand, introducing new chains and rebranding existing ones, which is all good news for the flooring industry. Flooring manufacturers report that hospitality product sales are strong, and the growth is expected to continue at least through 2017. “It’s definitely the best of times in hospitality,” remarks Kevin Sanders, vice president of Shaw Industries’ hospitality group.

Activity is occurring along all property levels, but the majority is being reported in upper midscale chains, like Courtyard, Hampton Inn and Holiday Inn-hotels with 100 to 200 guest rooms.

Amidst all the renovation from rebranding and building for new chains, surprising flooring trends are beginning to emerge, and one of the biggest is the use of hard surface products in guest rooms.

GUEST ROOM DEVELOPMENTS
For decades, designers specified nothing but carpet for guest rooms in hotels. Today, hotels are considering alternative surfaces, including hard surface products, such as ceramic tile, hardwood or luxury vinyl tile (LVT). But the prevailing product of choice seems to be LVT.

Several major hotel chains, including Marriott, Hilton and Intercontinental, have already begun to adopt LVT for guest rooms in some of their brands. Many of the limited service and full service brands under the Marriott International umbrella have started making the switch, although the high-end Renaissance brand is using it less frequently.

“The feedback we’re getting from guests is that they perceive it as a cleaner look than the carpet,” explains Nigel Hatcher, senior director of global designs for Marriott International. Guests also report that the vinyl wood look tile makes the rooms feel more spacious, which is especially important to Millennials.

Marriott is even running LVT into the bathrooms in new properties or when it’s time to take up old ceramic tile. The continuous flooring throughout the space adds to the spacious, warm feel that guests prefer, and eliminates grout lines that are difficult to keep clean.

LVT has gotten a facelift in recent years, with more authentic wood looks and a wider range of choices in higher end design, making it more attractive to the hospitality market. On the front end, LVT is more expensive than carpet, up to 100% more, but because it is more durable, it can last twice as long. Marriott’s renovation cycle is six years for soft goods like carpet, but 12 years for hard surfaces, so money spent upfront can be saved a few years down the line.

“A lot of extensive research went into the discussion related to hard surface flooring,” Hatcher explains. Sound attenuation between floors was one of the biggest concerns, so Marriott brought in several different LVT companies and had the products tested to find the right combination of quality material and backing.

In addition to guests, employees from every corner of the hotel were surveyed, especially operations and housekeeping. Housekeeping benefits from hard surface flooring because it is much quicker to clean than vacuuming and spot cleaning spills on carpet. A quick dust mop and a damp mop for spills is all that is needed day to day.

Now Marriott is concentrating on collecting feedback about how the new flooring is working. Sometimes after the implementation of a major change, the results bring surprises, but so far the feedback has been positive for the wood look LVT in guest rooms, both from guests and employees. “It’s been seen as a real win-win,” Hatcher reports.

He says that the hard surface floors are working best in warmer climates, like Florida, where there is a lot of humidity. Carpet can be an issue in those areas due to moisture retention, so the hard surface shift has been especially successful there. However, in colder climates, like at ski resorts, guests desire a warmer feel, so carpet will likely remain in the guest rooms there.

The trend to replace carpet with LVT actually began in the U.S. with economy hotels. Sanders says that Motel 6, one of Shaw hospitality’s largest customers, has decided to move from using carpet and laminate for its guest rooms to all LVT going forward. The chain has 1,100 hotels in the United States, which equates to a lot of LVT. Two other economy hotel chains, Value Place and Red Roof Inn, switched to LVT over the last two years as well.

Although different types of hotel properties look for different qualities of products, almost all prefer wood looks. Some of the boutique hotels opt for a more modern look, but they are the exception. Motel 6 chose a basic cherry look, and Marriott is using a more sophisticated product in a high-end grey tone. “It doesn’t look like your average wood that you would see in a residential application,” Sanders says.

Marriott recently acquired AC Hotels, a brand from Spain that it is introducing to the U.S. with a focus on Millennials. The first has opened in New Orleans, and 20 to 30 more will follow. “They are also planning to use LVT, but not a wood look,” Sanders explains. “They are looking at a clean white and light grey combination of three different planks.”

Not all hotels are going hard surface, however. Many chains are sticking with broadloom, at least for now. PET has become very popular in the residential market, but carpet in guest rooms is predominantly solution-dyed nylon.

Designers continue to push the design limits even when using carpet. Shaw is seeing more guest room carpet with full pattern repeats. “So if a guest room is 12’x20’, it may be a 20’ pattern repeat,” Sanders explains. “It’s like artwork on the floor.”

Shaw invested in ColorPoint tufting machinery to create these whole room patterns. The new machines are capable of tufting a full custom pattern of any length. “You can go all the way down a hallway, if you want to, with one unique design,” Sanders says. Shaw is promoting the technology for public space design, but also seeing it used in guest rooms as well, for designers who want a unique design to fill a room.

In some cases, hotels are choosing a combination of products for their guest rooms, for example an LVT wood look in the entry and bathroom, with carpet in the rest of the room.

PUBLIC SPACE TRENDS
Traditionally, hotel doors opened to a lobby lined with marble floors, but with the advent of the inkjet printing process, porcelain tile manufacturers now create stone looks that are difficult to distinguish from the original. This has led many hotels to opt for porcelain, which frees up money to spend on more expensive handcrafted area rugs for an upscale feel. In addition to being budget friendly at the point of purchase, porcelain is a less porous type of tile than stone and therefore much easier to clean, saving maintenance costs long term.

Hatcher says that the higher end hotels like Renaissance use 80/20 blend wool and nylon carpet for the public spaces like meeting halls and ballrooms. These areas require an upscale feel, but the flooring must be durable because the spaces sustain a different type of wear and tear than the guest rooms.

A few Marriott International hotels are experimenting with CYP in nylon instead of Axminster blends, but none of it has been down long enough yet to assess how it wears. Hatcher says that some of the bigger owners want to continue to use Axminster because they think that it lasts longer than the minimum six years.

THE GREENING OF HOSPITALITY
Many hotels have adopted green initiatives that include giving guests the option to reuse towels and bed linens, saving water and electricity with less laundering, for example. But from a construction standpoint, the hospitality sector has been slower to embrace sustainability. Whereas in the corporate sector designers actively search for green products, sustainability has not been a driving force for hospitality specification, likely because hotel owners are not willing to pay more for it.

Companies like Marriott International do pay attention, however. “As a company we always try to be as sustainable as possible, certainly looking at the manufacturers and how they go about the manufacturing process,” Hatcher says. “It has driven some of the decision making, but it’s not the only deciding factor.”

Manufacturers put an emphasis on sustainability as well. Shaw has been pushing reclamation for its cradle to cradle initiatives, for example. Each hotel discards thousands of square feet every six years, which adds up, even for a single property. With 53,000 hotels in the U.S. alone, that’s a mind-boggling amount of carpet that would otherwise end up in landfills every six years. LaQuinta, Extended Stay of America and Host hotels have each made a commitment to reclaim product and divert it from the landfill through Shaw’s program.