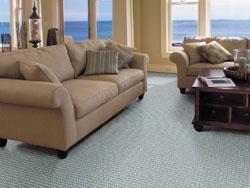 While Shaw, Mohawk and Beaulieu dominate the carpet manufacturing sector with roughly 80% of revenues, many smaller boutique mills are thriving in the luxury residential market, where flexibility, design, creativity and customer service make the difference to an exclusive market of upper end buyers. The luxury market is also less vulnerable to economic distress. Its customers aren’t interested in commodity products—the bread and butter of the large mills—as they build or remodel their homes.

Stanton, JMish and Nourison are three of the many mills serving this luxury segment. They all sell broadloom and don’t compete on price. Stylish design and high quality are what drive consumers to their products. These customers don’t care about price. They’ll spend more on their floors to get something really unique.

The potential market for these mills is much larger today than ever before. According to marketing consultant Rick Barrera, a little over half of the nation’s income is going to the top 20% of the population. That equates to $3.5 trillion in the hands of 23 million people. These mills have found a lucrative niche specializing in mostly wool and some nylon carpet that’s designed to make a statement in their customers’ homes.

To reach affluent consumers, these mills focus on a select group of retailers and interior designers. According to Jack Mishkin, founder of JMish, “There are approximately 500 to 700 retailers in the U.S. that are not price focused and know how to sell up. These are the retailers we focus on.”

Interior designers also play a critical role. According to Jonathan Cohen, executive VP at Stanton, “Over 50% of our business is either directed by or influenced by an interior designer.”

Gerard O’Keefe, VP of broadloom for Nourison, adds, “While we don’t sell directly to interior designers, some of our best dealers are to-the-trade showrooms that work exclusively with designers and upscale retailers who have a large designer following. Interior designers generally don’t like to work with mundane or run-of-the-mill products, and look for specialty items that make a statement.”

According to O’Keefe, “We’re in a constant creation mode. Inspiration for our products comes from anything and everything. From New York women’s fashion to furniture to historical textiles, the list of things that inspire carpet designers is seemingly endless.”

Bob Vanorder of JMish adds, “Wool has a softer feel and can be combined with silk, jute and linen to create exotic fiber blends.

Also, the green movement is gaining steam. Cohen believes that environmental considerations are becoming mainstream, and natural, renewable fibers like wool are attractive to designers and consumers who are green conscious.

Here’s a closer look at these three high end players.

JMish
Jack Mishkin is well known in the commercial market. He was one of the founders of Bentley Mills, the precursor of Bentley Prince Street, when that firm was started in 1980. Later, he joined Monterey Carpets as a partner and was instrumental in making that firm a design leader in the commercial market. With the opening of JMish in 2004, he’s concentrating on designing residential broadloom carpet with a distinctive look.

Most JMish products are skein dyed wool and are sold under the Jack Mishkin Signature Collection name. The company also sells luxurious nylon broadloom under the Prince Street House and Home name through a license agreement with Bentley Prince Street. Retail price points range from $40 to $100 per square yard. Currently, wool accounts for approximately 60% of the business and nylon makes up the rest. All JMish products are tufted.

The company’s 65,000 square foot operation is located in Cartersville, Georgia. JMish has 35 independent sales representatives. Growing 20% since 2004, current revenue is just below $10 million.

Nourison
Nourison, headquartered in Saddlebrook, New Jersey, was founded in 1981 as a handmade rug importer. It has competed in broadloom for the last five years. Quality, design and flexibility are the cornerstones of the business. Nourison uses 100% wool to create the look of handmade rugs in its upscale broadloom.

Coordination of carpet, runners and rugs is a main selling point for this company. Nourison, the lead brand, is a designer level, high end wool product representing 75% of the business, and retailing for $75 to $150 per square yard. Nour-Tex is a synthetic and wool blend line that is more affordable, and it represents 25% of the business with price points of $45 to $90 per square yard. All Nourison products were woven until last January, when the company introduced a line of tufted products. Nourison is vertically integrated, with design, color, weaving, and backing all done inhouse in its plant in China.

The company has its own sales representatives who target upscale flooring retailers. Nourison is a family owned business with annual sales of more than $100 million. Although broadloom is still relatively new for the company, it’s Nourison’s fastest growing product category, accounting for approximately 20% of sales.

Located in Syosset, New York, the company’s product mix includes approximately 60% wool and 40% synthetic. Most of its products are woven (65%), but tufted products also play a role. Retail price points cover a lot of area, ranging from $27 to $180 per square yard.

Stanton advertises directly to consumers in magazines like Veranda, House Beautiful and Architectural Digest. Also, the company’s website is designed for the consumer. Stanton has 40 sales representatives who sell the firm’s products through flooring dealers.

Stanton focuses on merchandising by showing its carpets in the context of an entire room. Displays, for example, show how hall and stair runners coordinate with broadloom. The Royal Sovereign, Earnest, and Anywhere collections are a few of the company’s most popular lines.

Kerrie Kelly Discusses Her Role as Chair Elect of ASID