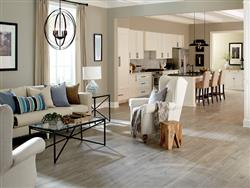 While the residential flooring market has been making single-digit gains, independent flooring retailers have still been struggling to keep their heads above water as big boxes, category killers and the Internet continue to find ways to take marketshare from them. Price hikes and increases in operating costs-including freight charges-have narrowed margins. And the lack of qualified installers is damaging many retailers’ businesses.

As one surveyed retailer put it, “We are going to have an installer crisis very soon,” though others would say it’s already a crisis. Many retailers noted that the bulk of qualified installers are “at the sunset of their careers and retiring,” and “no one is interested in learning the trade.” And several retailers mentioned the need for strategies to attract younger generations to the trade. One retailer cited the “need to create an installation training facility like other construction trades.” Another added, “Bring training to the vocational levels.”

The workforce issue isn’t limited to installers. Many retailers are having trouble finding dependable, detail-oriented salespeople that are driven and can work hard without supervision. One survey respondent wrote, “Young people today want to start at $60K, which is unreasonable.”

However, the most fundamental dynamic impacting the success of independent retailers, according to those surveyed, is their relationship with manufacturers, and their frustration with manufacturers’ support of home centers and big boxes. One retailer, who wrote such a long note that he apologized for going “off on a tear,” concluded by noting that “dealers are tired of feeling gouged by the mills. The buyer is our customer, but WE are the mills’ [customer].”

The same retailer noted other purportedly unfair practices, like will-call fees that can add hugely to landed pricing, particularly on smaller installations, and fuel surcharges after events like Katrina that remain even after the market rights itself. And he also adds, “Our industry has been hit several times now with price fixing class action suits (carpet and pad), yet without fail we all receive coordinated price increases one after the other.”

Several retailers pointed out that there is not enough brand recognition in the market. One respondent, lamenting the lack of “institutional advertising for carpet,” wrote, “Even branding (Stainmaster etc.) has faded away over the last decade. We all remember the baby in the walker, don’t we? How long has it been?”

However, it’s worth noting that the LVT and rigid LVT explosion has helped buoy independent retailers, which as a group are faster to recognize trends than the lumbering home centers. The wave has practically saturated traditional flooring retailers, and now it’s becoming prevalent online and among the big boxes.

WHO THEY ARE
Independent flooring retailers from all over the country responded to this year’s Floor Focus survey. About 20% of the respondents come from the East, another 22% come from the West, another 24% are from the South, and the Midwest makes up the biggest piece of the pie, at 34%. We asked respondents about their annual revenues, and this year 12% reported sales of less than $600,000, down from 18% last year but the same as the results in 2016. Another 16% reported sales from $600,000 to $1 million, also down from 18% last year. That’s 28% reporting sales up to $1 million, compared to 36% last year, strongly suggesting some overall gains, which is underscored by an increase from 18% to 20% for those with sales of $1 million to $2 million.

The higher end is largely unchanged, with 5% reporting sales from $10 million to $15 million, and 10% claiming sales north of $15 million.

Floor Focus also compared changes in retailers’ earnings and revenues. Like last year, respondents on average claim that both revenues and earnings are up, and that revenues were up more than earnings, though the difference was less than 0.4%. This suggests that retailers have been dealing with somewhat narrower margins.

In terms of how retailers compensate salespeople, on average across the nation 34% of respondents pay a straight salary, 25% are commission-only, and 41% do a combination. This year, straight salaries are highest in the East, at 46%, with the South and Midwest at 32% and the West at 29%. And commissions are highest in the South at 41%, followed by the West at 29%, the East at 17% and the Midwest at 16%. These results correlate strongly with previous years, with the East always well ahead of the field in salaries, and with the Midwest lowest in commissions.

When it comes to staffing, the other big issue with retailers is installation crews. The last few years have yielded a serious dearth of professional installers, both in the residential and commercial markets. And a Department of Labor focus on how businesses use installers has made retailers closely examine their own operations to determine if their installers should be categorized as employees or subcontractors.

This year, 21% of respondents claim that their installers are company employees, and 79% report that they use independent contractors-compared to 19% and 81% last year and 16% and 84% in 2016, respectively. So it looks as though retailers are steadily shifting the balance toward company installers, perhaps in part to duck Department of Labor scrutiny.

The South continues to be the strongest market for contracted installers, at 92% of respondents, compared to 95% in 2017 and 91% the year before. The South and Midwest are close to the average, while in the East, only 64% of installers are independent contractors.

This year, 47% of respondents report that they are part of buying groups, marginally up from 2017. But there is some regional variation. Participation is highest in the West, at 58%, followed by the Midwest at 51%. And it’s lowest in the East at only 39% and the South at 43%.

Also, 51% of those in groups report that they are very satisfied, down from 53% last year and 62% in 2016, so it looks like group members are feeling a need for more support from their groups. And 3% of those not in groups say they’re considering joining one, marginally down from 4% last year.