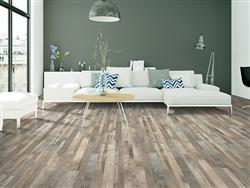 This year’s Surfaces show, held at Las Vegas’ Mandalay Bay Convention Center in mid-January, was one of the best in recent years, not so much in terms of the statistics-though both exhibitor numbers and the total net square footage showed growth-but more because of the actual floorcovering introductions, with innovations on the face, core and back of the products, and designs that were inventive, bold and fashion forward.

With a couple of years of improving numbers, it looks like Surfaces, the largest residential flooring show in the Western Hemisphere, is managing to stay relevant. It helps that Mohawk is back in force, anchoring one end of the show floor, with Mannington anchoring the other. And dealers were feeling optimistic, based on a late surge in activity toward the end of last year. Exhibitors were up about 5% to 736 (for a total of 800 brands), and the net square footage was also up about 5% to nearly 420,000 square feet, according to Informa PLC, which owns and operates the trade show.

Product trade shows have their detractors-after all, they can be costly, time-consuming and in many ways disruptive-but they do offer unique opportunities, like the opportunity to influence first-hand a massive audience that will in turn, if moved, influence others. And as one industry veteran put it, likening the show to Detroit’s auto shows, “Everyone is on the stage together.” It drives manufacturers to step up their game and put their best foot forward.

It also helps when the competition surges, as it is doing on the hard surface side with LVT and its blue-eyed boy, rigid LVT. Just a few years ago, there were only a few LVT producers in the market, most of them specialists in the category. Now the specialists are competing with LVT programs from hardwood producers, laminate manufacturers and carpet mills-even Interface on the commercial side has an LVT program. And now the same thing is occurring with rigid LVT, the category launched by US Floors just four years ago.

On the soft surface side, it’s a different sort of story, with carpet losing share to hard surface flooring and losing value from commoditization. So the efforts there have been about adding value, and at this year’s show most of the carpet mills were squarely focused on showcasing their worth with new patterns, colors and constructions. And there was plenty of thicker, denser, tighter gauge product.

In terms of patterns, the strongest trend was the sheer number of them. With barely a monolithic frieze in sight, carpet mills on the whole embraced patterns, from traditional motifs to commercial-inspired designs to entirely new design directions. At the higher end, there were plenty of mixed-fiber offerings, with colors and luster levels adding depth, dimension and visual interest. State-of-the-art tufting machinery was utilized to its fullest, creating textures, carved impressions, multicolored designs and even looks echoing hardwood visuals like distressed concrete and hardwood graining.

Performance was also a big driver on the carpet side, with all sorts of treatments and wicking layers to contain and release moisture, depending on the need. Solution-dyed fibers were more prevalent than ever. And in polyesters, the market overall crept up in value and price points, with thicker constructions and more sophisticated patterns.

In carpet colors, blues were hot, though not too vibrant or high chroma. Dusty, smoky pale and mid-range blues, and even some greens, livened up the grey and taupe palettes. In general, colors were light and fairly warm.

On the hard surface side, the trends toward planks and large formats were alive and well, but the end is in sight-for a range of reasons, from shipping to installation, these products can only get so big, and they’re just about there. So now manufacturers are starting to play with formats in other ways, like thinner planks for more installation options and, most notably, mixed formats like multi-width, multi-length planks boxed together. In both resilient flooring and ceramic tile, hexagons are hot.

Matte finishes and oiled looks are still hot, but now there’s more nuance. New double-stained looks give wood grain contrasting depth. And there were a lot of overlays and other printed effects, mostly in faded, rustic expressions, on hardwoods and hardwood-look products-in other words, on everything. Color jumps within single SKUs are still trending, tempered by a collective realization that there’s such a thing as too busy. And those hardwood designs are continuing to climb up the walls. Several manufacturers offered dedicated wall covering programs.

In laminate flooring, the strongest trend relates to construction, with the development of moisture resistant laminate to compete with rigid LVT, which is waterproof.

One interesting counter-trend was high gloss in porcelain. Without a doubt, matte and honed finishes are still the leading trend, but several porcelain manufacturers showcased lines of high gloss tiles, or collections available in both high and low gloss.