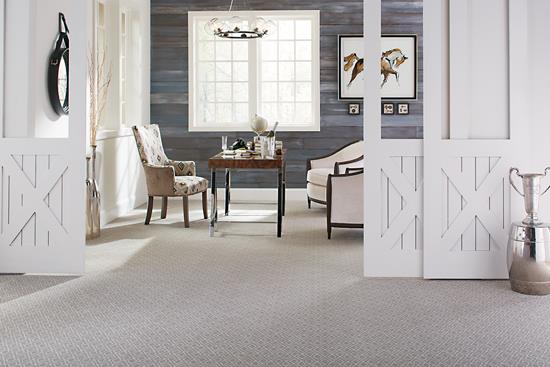 Flooring manufacturers were out in force this year in Surfaces’ newly consolidated exhibit space at the Mandalay Bay Convention Center. The return of big players like Mohawk and Armstrong, along with Lauzon, Karndean, Gerflor and others, seemed to turn back the clock to the days before the Great Recession, even though the market itself shows no signs of rebounding to that degree.

Mannington’s centennial celebration and massive off-site party hearkened back to 15 years ago, when such parties were commonplace, headlined by prominent comedians and musical acts. And Mohawk’s invitation-only party on the show floor, with acrobats and musicians and a generally carnival atmosphere, also added sparkle to the show.

It helped that there were bigger crowds to carry the buzz. Although Informa PLC, which owns The International Surface Event (TISE), does not disclose attendee numbers, it reports that attendance was up 10% this year. Exhibiting companies were down marginally from 2015, with 700 exhibitors compared to 707 last year, although this year saw 178 first-time exhibitors. There were nearly 370,000 square feet of exhibits in the expanded exhibit hall, which itself boasts just over 400,000 square feet.

The vast hall was an experience unto itself. It took many attendees a day just to work out the dimensions and how to get around. The expanded space wraps around a corner, so from most spots it’s impossible to see the whole show floor. Mannington anchored one end and Mohawk the other, and trekkings between them was no small feat.

The Ignite education program also got a boost, with 55 sessions, nearly 100 speakers and over 280 CEUs. Informa reports that attendee participation in the program was up 7% over 2015, with standing room only for many sessions.

In terms of flooring, LVT was more prominent than ever, with everyone from Phenix Flooring to Quick-Step adding LVT programs. But ever more prominent was the growth in wood polymer composite flooring (WPC), an LVT hybrid that has taken the flooring industry by storm. The leader of the movement is US Floors, which has a patent on Coretec, the first WPC product, with licensing through recent partnerships with Välinge and Mohawk’s Unilin. On the soft surface side, there was more solution-dyed nylon and PET carpet than ever before, and strong demand suggests that these gains will continue.