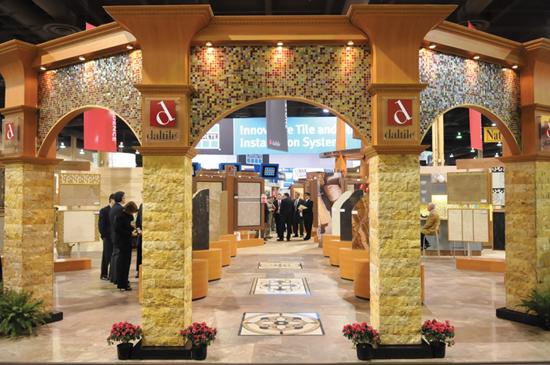 Surfaces has been the national residential flooring expo since 1996, and over the years the show has had its ups and downs, mirroring the state of the U.S. economy. For the first five years, the show was run by the World Floor Covering Association, which sold Surfaces to Hanley Wood for $40 million—though it remains the show’s sponsor. In 2001, Hanley Wood’s first year with the show, attendance was over 39,000. Numbers dipped a bit during the ensuing recession, eventually peaking at 40,588 in 2006, the final year of the housing boom.

Though attendance went down over the following three years, numbers have been rising since 2009 and total attendance last year was 25,392, the first year at Mandalay Bay. Hanley Wood is contracted to run Surfaces at Mandalay Bay through 2015.

While Surfaces is smaller than in years past, and the two biggest players, Shaw and Mohawk, have not exhibited since 2003—Armstrong also stopped exhibiting, but it’s back now in a separate exhibit area—the show remains an indispensable event for tens of thousands of flooring professionals. All the manufacturers time their product introductions to coincide with the show, and retailers, distributors and other flooring professionals attend first and foremost because a lot of business gets done there.

But Surfaces is more than that. It’s the only time that nearly the entire residential flooring industry comes together under one roof, and that makes for an exciting, dynamic atmosphere. It’s nonstop activity. Attendees have three days to race around the show floors, looking at thousands of new products, absorbing color, design and construction trends, checking out all the innovations, both good and lousy, and trading observations with their fellow attendees.

Beyond that are all the educational opportunities, including over 75 accredited courses at this year’s show, giving flooring retailers tools for success for the new year. The education portion of Surfaces runs for four days. Courses cover everything from social media and marketing to product installation, sustainability, strategies for competing against big boxes, customer service, and color and design trends—to name a few.

After working hard all day, many take that energy into the evening and out onto the Strip for drinks, fantastic meals (Vegas has the highest concentration of haute cuisine in the world), and a slew of stunning shows. And that’s what makes Vegas the ideal location for Surfaces, turning a trade show into a one-of-a-kind experience.

TRACKING TRENDS
This year’s Trends Hub will be located in a prominent position on the main show floor, near the entrance to the hall, between Beaulieu and Mannington. The Trends Hub will feature four large trend boards that detail what will be hot for the 2012-2013 season. These boards will include color, material and styling directions. In addition, the furniture and lighting in the booth will reflect the styles of the coming year.

Victoria Redshaw, lead trend forecaster and managing director of Scarlet Opus, heads up the team that formulates and assembles the Trends Hub. Redshaw believes that the flooring industry needs to be more in touch with what’s happening in the interiors market and needs to tie its styling in with fabrics, furniture and wallpaper.

Redshaw will offer a seminar on Designer Day (Wednesday, January 25) called Design and Color Trends: 2012-2013, which will cover all the trends for the 2012-2013 season. The seminar, which starts at 8:00 a.m., will also provide a bit of insight on how trends are forecasted. Then at 10:30 a.m., Redshaw will lead participants on a speed tour of the show floor, highlighting the products that she sees as aligning best with upcoming trends.

Designer Day will include additional events by other trend and design experts as well. From noon until 1:00 p.m., Antonio Ballatore, host of HGTV’s The Antonio Treatment and season four winner of the network’s Design Star competition, will speak on Up and Coming Trends for Surfaces at the Design Luncheon. Following that, from 1:30 p.m. to 3:00 p.m., participants will take a behind-the-scenes tour of The Cosmopolitan of Las Vegas led by the designers who envisioned the resort and made material selections to support that vision. Lastly, at 4:00 p.m., Mark Woodman, president of the Color Marketing Group, will speak on international trends in surface decoration.

WHAT KEEPS RETAILERS COMING
Cluff Carpet One Floor & Home, Waterford, Connecticut
Greg Cluff opened his retail business with his father, brother and brother-in-law in 1976. He had been an installer since the age of 16, a trade he learned from his father. Cluff has attended Surfaces for at least 16 years.

He attends the show because it is the one location where a retailer can see virtually everything offered in the floorcovering industry. There are some products, he says, that aren’t fully represented through an ad or a sample—seeing these in person is a valuable experience. In addition, Cluff notes that he will never have a rep with leather floor tile or puzzle floor knock on his door. His exposure to these unique products only comes through Surfaces.

Cluff had a long-running plan of attack for the show when it was at The Sands, but he hasn’t yet established his strategy for the new location. He likes the new Mandalay Bay venue, however, and believes that the Surfaces show is a great opportunity for manufacturers, though he isn’t sure if they are taking full advantage of the opportunity, since he hasn’t seen much new and exciting, especially out of the large mills, in the last few years.

Cluff appreciates that the Carpet One show occurs just before Surfaces. He sees what his membership organization is offering, then fills in the gaps for his market at Surfaces.

Larry’s Carpet One Floor & Home, Sebringville, Ontario
Larry Doell, a former installer, and his wife Hilary decided that they would like to try the flooring retail business 33 years ago. In attending the Surfaces show, which they have done for the last ten years, Larry and Hilary focus on seeking products and tools that are new and innovative, things that set them apart from every other flooring retailer.

Last year at the show, the Doells purchased an Accu-Cut Z-12 laser cutting machine for carpet and area rugs. The machine allows them to cut and engrave custom patterns and logos, even on scraps and remnants. The Doells were first in line to buy one of the new Z-12 machines, and they wouldn’t have heard about it had they not attended the show.

Having access to new products before their competitors do is one of the greatest benefits of the Surfaces show for the Doells. Surfaces also provides the couple with a good view of how the industry is trending style-wise, so they can make more informed decisions about their inventory.

The Doells have a game plan for Surfaces that they follow annually. For the first two days of the show, they visit with large vendors like Mannington and Beaulieu. On the third day, they visit with smaller vendors, and on the fourth day, they attend seminars. Unless something really catches their eye, as the Z-12 did, the couple usually doesn’t make their final decisions on purchases until after the show.

For Cissell, Surfaces is an important event for doing business. He and his team pursue a number of agendas at the show, including meeting with major suppliers, investigating potential suppliers, learning about the latest in equipment, attending seminars, and looking out for new and innovative ideas.

According to Cissell, the Surfaces show helps him set Nebraska Furniture Mart’s programs with its major suppliers for the full year. Also, Cissell takes with him additional staff for specific assignments. This year, for instance, his team, which includes sales and installation managers, will focus on product installation, checking out supplies and technical equipment that improve installation operations.

Cissell’s schedule is often too busy to take advantage of seminars and workshops, but this year he has set aside the time to attend Victoria Redshaw’s workshop, Design and Color Trends: 2012-2013.

One of the benefits of Surfaces for Cissell and his team is the opportunity to walk the show. While the first priority is to meet with their supply partners—and that’s a quantifiable benefit of going to Surfaces—it’s harder to quantify the value of seeing everything the industry has to offer in a single venue.

In Cissell’s opinion, the folks at Hanley Wood do a “fantastic job” with the show, even though he’s still getting used to the new location in Mandalay Bay. Cissell adds, “Given the economy, they do everything they can possibly do to keep us engaged and informed and to make it easier and easier to navigate the show.”

Miller & Sons Carpet One Floor & Home, Hemet, California
Larry Miller, former owner of Miller & Sons, has officially retired, but he can’t seem to get the flooring bug out of his system. He’s attended every Surfaces show, going back to the 1980s when it was more of a regional show—the Furniture and Flooring Mart, held in San Francisco. And he’ll be at this year’s show too.

Miller & Sons is a Carpet One member and throughout the course of the year the retailer is largely exposed to products aligned with Carpet One, so Surfaces offers an opportunity to see everything else that is out there. Just as important are all of the equipment, adhesives and accessories.

Miller also appreciates that the show is in Las Vegas. “If it was in Denver, I might not go,” he says.

When the show was at the Sands, Miller used to do one floor on the first day and the other on the second day, but he had to adjust his strategy last year at Mandalay Bay. He wandered the levels, getting the lay of the land as he tried to hit all the exhibit spaces. In general, he’s happy with the number and quality of exhibitors, but he wishes that Shaw and Mohawk were still there.