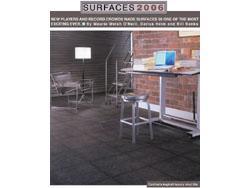 Any hint that the economy might be cooling off a bit was nowhere evident at Surfaces 2006, which played to both record crowds and a record number of exhibitors. There were no signs, either, that the Las Vegas Home Furnishings Market, which was held at the same time, took away a single visitor from Surfaces.

While the nation’s three largest floorcovering manufacturers—Mohawk, Shaw and Armstrong—continue to hold their own shows around the country, divisions of Shaw and Mohawk were showing their stuff at the Sands Convention Center. Dal-Tile, Mohawk’s ceramic business, was there as usual, and so was Helios, the firm’s high end rug business, which had its usual prominent display in the Wools of New Zealand exhibit area. And Shaw’s new residential fiber brand, Anso, was there offering retailers bigger and better spiffs than ever, while Solutia Wear-Dated was focusing a lot of attention on its new alliance with Mohawk.

Hard surface manufacturers continue to dominate Surfaces, with Mannington Mills and Tarkett holding their usual prominent places at the show. Mannington also continued to honor their retailers with a blockbuster dinner and show starring Brad Garrett, the co-star of Everybody Loves Raymond. The carpet producers were led by Beaulieu, Dixie, Masland, Gulistan and the huge contingent of specialty producers that were part of the Wools of New Zealand exhibit. But hard surface producers accounted for the overwhelming majority of producers, including on the ground floor, where dozens of Chinese producers offered container loads of hardwood and ceramic products at extraordinary prices. There were more Chinese producers than ever at this show, but it was evident that many of them have yet to master the language, the cultural differences, the styling or the intricate U.S. distribution network.

Hardwood in general has turned out to be a real star at Surfaces, as long-time exhibitors continue to surprise everyone with a constant stream of new species and new ways to present their products. European laminate players, like Surfaces newcomer Kaindl, continue to be attracted to the U.S. market, both by the gap between the dollar and the euro, and by the seemingly endless potential for laminates in the U.S. marketplace.

While hard surfaces manufacturers continue to show more and more sophisticated installation systems for their products, one of the more surprising trends we saw at Surfaces 06 was the number of commercial buyers who were there looking for new floors for hotel and resort projects, offices and condos.

For the full report on Surfaces 06, see the March 2006 issue of Floor Focus.