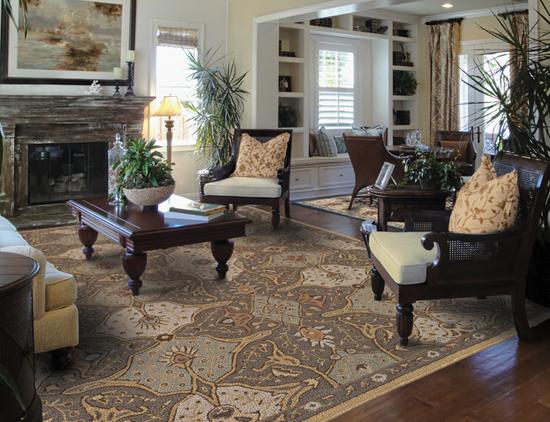 The halls of the Atlanta Rug Market were relatively quiet on the first day of the 2010 show. The buyers who were in attendance seemed to move in groups: some showrooms were buzzing with activity, while in others salespeople waited quietly for a customer or two to wander in. With an abundance of new product roll outs, the exhibitors were ready to do business and seemed intent on reminding visitors that displaying dated back stock would not pull customers into their showrooms or inspire them to buy. As the worst of the recession is, hopefully, an image in our rearview mirror, dealers and manufacturers firmly believe that the new consumer is seeking a fresh, timely look at a reasonable price point.

Following the trends of the runway, grey was the tone of the show. From cool silver to taupe-toned oyster, the gamut of greys was often paired with denim blue, apple green or lavender. On the other end of the spectrum, bright global colors were in abundance, especially in shags; cherry, true purple and fruit punch are engineered to add a pop of color to a space.

Design continues to move away from traditional looks. Even Karastan, a historically ultra conservative brand style-wise, rolled out a number of new transitional and contemporary visuals, often loose geometrics or large viney florals. Open backgrounds and overscale designs were popular. Circles abounded. And, in a time when people are less likely to use decorators than to design their homes themselves, dealers and manufacturers are touting looks that are quieter and easier to work with. The focus has shifted from multi-colored rugs to rugs with simpler, more limited colorways.

Every dealer we interviewed reported that they were offering lower price points to match the consumer’s current frugal buying habits. It wasn’t rare to hear that a new line featured 5’x8’ area rugs at $199 MSRP. While there were still quite a few new $1,000 plus introductions, these were generally reserved for extraordinary rugs, Nourison’s Calvin Klein branded Prairie for instance, which features rectangular blocks of cowhide that achieves a linear fieldstone type look. In some cases, with lower price points came smaller sizes—rather than a true 5’x8’, some dealers have pared a few inches off the length or the width, presumably to save on materials costs. Face weights are lower as well.

Several exhibitors noted that they were trending toward patterns that translated well online, and while this might seem like a bad turn for retailers, Safavieh, for instance, noted that retailers had the option of featuring Safavieh rugs on their store’s websites as well. The company drop-ships as needed. Of course, if manufacturers and importers are encouraging a trend toward online sales, it isn’t surprising that they are seeing fewer buyers in their AmericasMart showrooms.

Shaw Living introduced Woven Expressions, a coordinating broadloom and area rug collection in solution dyed olefin. Woven Expressions features two constructions, Platinum and Gold. Platinum, which is offered in 31 designs, has 1.5 million points per square meter. A 5’x8’ retails for $649. Gold, with 500,000 points, has 41 designs and retails at $459. Woven Expressions has a broad range of looks in all categories, from animal print to burberry.

The company also introduced five new colors in its opening price point shag, Affinity. The shag features two yarns: a bright luster, high twist and a loose-woven, muted tone. The line features colors from earth tones to brights. Most of the colors added this year were rich jewel tones like true red and eggplant.

There are 330 Shaw Living Interactive Displays in the field at present. The display, which acts as silent salesperson on the showroom floor, has over 6,000 SKUs and takes up less than 20 square feet of space. Customers interact with the unit via a touch screen that allows them to find their perfect rug using a range of search criteria: color, style, size, etc. The display ranks its offerings using current market data and has the ability to save a customer’s selections for future consideration. Though all Shaw Living Interactive Displays are spoken for currently, a new shipment is expected this fall.

Much of the buzz in the Oriental Weavers space centered around the company’s new ad campaign, featuring beautiful room scenes studded with strikingly posed women. While all of the ads are sexy, and maybe even provocative, they prove the point that all publicity is good publicity, and the campaign certainly has people talking.

Oriental Weavers reports that it is seeing the market trend towards transitional looks in softer, safer colors. Like most, the company has introduced lower price point lines, but it has rolled out higher price points as well. Huntley, a Sphinx product,  features hand spun and hand tufted New Zealand wool in seven patterns that span from modern to updated traditional. A 5’x8’ Huntley retails for $999; the line is made in China.

Also from Sphinx, Addison is a hand tufted version of a Sumac or flatwoven look. The India-made wool line retails for about $399 for a 5’x8’ and is offered in 15 patterns. At the value end of Oriental Weavers’ Sphinx line, Emerson is a new machine-made, polypropylene collection that retails for $149 for a 5’x8’. Emerson is offered in 14 patterns that run the gamut style-wise, all of which offer high fashion at a very accessible price.

Karastan’s rug business has restructured under Bill Kilbride’s Mohawk Home. Beneath the umbrella of the new organization, Karastran rug has been separated from the broadloom branded business, and the rug division is led by Steve Roan. Interestingly, the company seems to be both loosening its ties and returning to its roots. Karastan rugs are, and always have been, made in Eden, North Carolina. Typically, however, the brand has clung tightly to a traditional look and hefty price point.

Under Roan’s leadership, however, Karastan is implementing a good, better, best pricing and quality structure, offering non-traditional Karastan price points. Additionally, the company is rolling out transitional looks. True to the Karastan brand, the company continues to hold tight to its standards of quality in both workmanship and service.

Karastan Rug has several representatives who have been with the company since the early sixties. In addition, the company recently substituted real people for its electronic customer service phone system. In keeping with modern times, the company has created a Facebook page for the brand as well.

One of the company’s new introductions under its Studio Karastan line, Knightsen, features a transitional, open pattern and updated color palette. A 5’x8’ in the line retails for $499.

Operating under the belief that the present day consumer values choice almost as much as price, Dalyn has expanded its custom rug collection. The collection now offers 12 boards with 450 color options across all the programs. Dalyn’s Sierra Sisal, a new board, is offered in four base colors with 41 different border fabric options. In addition, Sierra features 15 sizes and three shapes. The collection has a $499 price point for a 5’x8’—all combinations of base and border are the same price—and is guaranteed in two weeks for Dalyn’s certified custom dealers. In addition to the sisal, Dalyn’s custom collection is offered in shag, wool, seagrass, nylon pile and a number of other fibers.

The company has developed an iPad app for its custom rug collection as well. A dealer login is needed to access both the online and iPad customer builder sites.

Like many other rug makers, Nourison is offering more products at a moderate price points and focusing a bit more on crossover designs that fall somewhere between contemporary and transitional. The company still sells primarily wool rugs, though it has also added fiber blends to its mix.

The company’s India-made Skyland collection is a textured hand tufted wool that retails at $499 for a 5’x8’. Skyland offers hand carved detail and looks that range from stripes and abstracts to large format roses and animal prints. In addition, Nourison expanded its 50 to Infinity collection that was introduced in 2009. 50 to Infinity offers Nourison’s popular broadloom patterns in rug form. Additions to the line included grey tones, which are popular at present. The collection offers room-sized standard, round and octagonal shapes, as well as runners and scatter rugs, for a total of 50 options with set prices. A 5’x8’ retails for between $799 and $899.

Nourison’s Calvin Klein line, which has been a part of the company’s portfolio for seven years, has moved from hand knotted product to handmade. The line has a number of stylish new additions including Pasture, a grey-toned rug with a honeycomb pattern and texture. Luster Wash, a line that was inspired by skyscapes, is Calvin Klein’s bestseller by units. It is offered in six colors, and a 5’x8’ retails for about $849.

Capel introduced a line of transitional-contemporary rugs under the Flair line. Flair has three patterns that each offer three color options. The wool products are hand tufted in India and a 5’x8’ retails for $399.

Inspired by color, Capel rolled out is new Candy line, a reversible chenille that comes in custom sizes. Candy features stripes of fruit punch, robin’s egg blue and chocolate, among other colors. With its happy, fresh feel, the line is perfect for a kid’s room or sun porch. A 5’x8’ of Candy retails for $499.

Safavieh notes a consumer interest in hand tufted products at present. To fulfill that demand, the company has introduced a number of hand tufted New Zealand wool products under the Martha Stewart line. The introductions feature muted tones and retail from $500 and $600 for a 5’x8’. Since the Martha Stewart brand is now moving Home Depot, it will be interesting to see what happens with some of her high-end branded lines. Of course, Stewart has had a presence in the value channel previously with her Kmart association, but the brand’s introduction in Home Depot represents more direct competition for Safavieh’s independent floorcovering retailers than Kmart posed.

Safavieh also introduced Tibetan, which features a textural pattern and single color palettes. Tibetan is offered in four levels of quality, from all wool to wool and silk combinations. Tibetan can trend towards either contemporary or traditional looks based on the environment within which they are used. A 5’x8’ Tibetan starts at $975.

Safavieh sells rugs and furniture through its own retail locations in the New York City area.

828 International Trading Company offered a few unique introductions, including its Acacia line, a hooked polyester rug with shag accents. The line has a funky feel, is made in China, and retails for about $199 for a 5’x8’.

Another of 828’s introductions is Ellington. Ellington is an India-made wool and silk hand tufted rug that is double-washed. Available in both transitional and traditional looks, Ellington has silk highlights that really make the design pop.

Momeni had many introductions at the Atlanta show, most of which were in contemporary or transitional looks.  The company’s hand loomed Sydney, which emulates loribaft gabbehs, is open backed and retails for $599 in a 5’x8’. Momeni’s New Windsor line is a hooked polyester. New Windsor’s designs are based on Moroccan and Spanish tiles and the product retails for $299 in a 5’x8’ size.