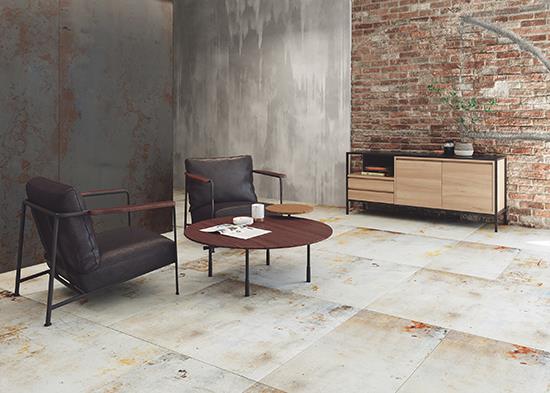 Rich glazes, dimensional texture, luster contrasts, patterning from evocative to hyperrealistic, saturated colors-this is a short list of the beauty of Spanish tile. Add to that its technical strengths, such as extreme durability, cleanability and antimicrobial properties, and it is no wonder that Spanish tiles are taking share in the flooring market. The post-Covid era has shown that these characteristics of tile are increasingly desirable.

Spanish tile has experienced sustained growth in the U.S. market, growing to 22.9% of its exports in 2021. Europe, Asia and the Middle East are the three next largest geographic areas. Spain is currently the largest supplier of ceramic tile in the U.S. in terms of volume, rivaled only by Italy, which is the largest in terms of dollars.

INNOVATION
The Spanish tile industry is known for its history of innovation, particularly for technical advances in glazes and small-format tiles. It is responsible for the development of digital printing, one of the most game-changing developments in ceramic tile. The first digital inkjet printer for ceramics was showcased at Cevisama by Kerajet in 2010.

In a more recent development, a new process has increased the textural possibilities and realism in tile looks. Known as 4D, this technology was pioneered by Torecid, a Spanish manufacturer of glaze and other compounds. The first commercialized versions were debuted by the Spanish tile producers Peronda Group and Inalco. Prior to this development, tile embossing was randomized and unsynchronized with surface pattern. With this new development, 3D texture can be applied to the tile by adding relief in the glaze layer, which the inkjet printer reads, printing the digital pattern in register. This creates an amazing range of visual possibilities from hyperrealism of materials to entirely new looks.

Ceramic tile is produced with one of three primary methods-pressing, extrusion and a continuous roller process. Until now, the continuous process has only been appropriate for the production of large-format porcelain products. In a game-changing new development, the Peronda Group is using the continuous process to manufacture ceramic and smaller format tiles, including paving tiles. This will allow Peronda’s three brands to offer a wide variety of products that coordinate throughout an installation or building. The first example of this is Museum Surface’s Strond collection.

Exports from Spain to the U.S. were rapidly accelerating even prior to 2019, when anti-dumping legislation essentially stopped tile imports from China. Europe had passed anti-dumping measures against Chinese tile imports earlier, in 2010. Spain’s expertise in wall and small-format tiles made it the ideal candidate to fill the void of Chinese tile, especially in the U.S. market, the biggest consumer of subway tiles worldwide. Large-format porcelain tiles were another product from the Chinese tile portfolio that has been captured by Spain, due in part to its strength in digital design.

ENERGY PRICES
Spain is experiencing serious challenges from the global unrest related to Russia’s attack of Ukraine. Last month, Vicente Nomdedeu, president of the Spanish Ceramic Tile Manufacturers’ Association (ASCER), succinctly described the situation to a group of journalists and designers in a press conference that was held to outline production, sales, exports and trends in the Spanish tile. “The invasion by Russia of Ukraine has disrupted lives and created chaos in international markets and energy markets, increasing fuel prices in Europe by 90%+ and adding over two billion euros in increased costs. It has also created a situation of serious instability in raw material sources,” Nomdedeu said.

Although there were price increases issued at the end of last year and again this spring, the Spanish tile industry is planning to forego additional price increases in the near term. ASCER, hand in glove with ICEX-the Spanish Institute of Foreign Trade, a public entity of the Ministry of Industry & Commerce in Spain-has determined this strategy for the U.S. market, deciding to keep prices where they are and absorb some of the loss of margin.

Spain has also been addressing the rising energy prices in its ongoing work on the development of alternative sources. Since the Paris Climate Accords, the E.U. has had a goal of making every industry in Europe carbon neutral by 2050. “From 2015 forward, the majority of product development projects have been focused on the goal of eliminating fossil fuel,” stated Ryan Fasan, technical consultant for Tile of Spain.

One highly successful project is in the area of cogeneration, which has been pioneered by the Spanish tile industry. Ceramic kilns are fueled by natural gas in order to create their high temperatures. Nearly all of the other manufacturing equipment in a tile factory can run off electricity that has been cogenerated from energy produced by the kilns.

Tile manufacturers also continue to energetically pursue the development of alternative sources of energy, including a solar farm outside of Castellon, the home to around 80% of the Spanish tile industry, accounting for 94% of Spain’s total production.

SUPPLY CHALLENGES
In order to make up for the loss of clay resources from the Ukraine, the Spanish tile industry has found new suppliers of ball clay from Turkey, the U.K. and Portugal. Adapting to these new raw materials has forced manufacturers to adjust their process. As Fasan explained, “Creating a new formula has impacts at every stage in production, including glaze formulations and firing curve. Trials are quick and ongoing. As soon as they are getting new sources, they are running tests. The best options are the ones that require the least modification of production parameters.”

Spanish red clay could potentially be a viable resource, yet there has been a market bias against red clay since around the 1980s, in response to the Mexican and Italian red clay of that era. Hopefully, this is changing. A range of products designed by Francisco Segarra in collaboration with Peronda, made out of local clay, has been receiving high acclaim. The collection, named FS Peronda, explores the classic patterns of old ceramic tiles as part of the designer’s retro/vintage aesthetic.

Collaboration across the industry is impressive, both between companies and industry-wide. Each factory is built around a specific process or group of processes, with some companies operating only one or two facilities and others operating several-even ten or more. It is common to source material from a different manufacturer when a company wants to round out its brand offering with a product that does not fit into its plant structure.

PASSPORT TO CREATIVITY
Tile of Spain hosted a select group of editors, designers and architects in Valencia, Spain for this year’s Passport to Creativity tour, June 13 to 17. The trip replaced a planned journey to Cevisama, Spain’s international ceramics and trade fair, which has been postponed to February 2023 due to some of the conditions explored in this article. Passport to Creativity was highly educational, with a detailed exploration of the Spanish tile industry along with new experiences and inspiration. Participants visited a broad spectrum of manufacturing facilities and showrooms, and also experienced the modern and historic architecture of Valencia, showcasing the long tradition of Spanish tile in architecture.