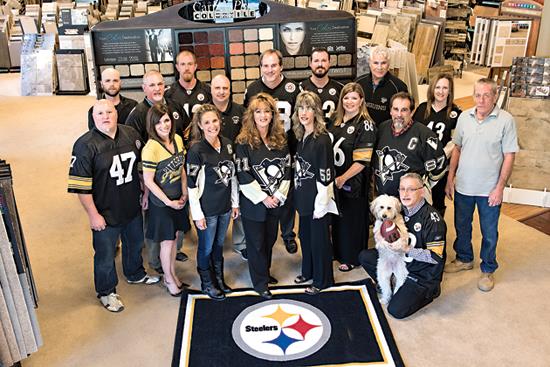 On the Friday before Labor Day weekend in 2009, Stacey Pape found herself at a crossroads: the tension with her brother, with whom she was running the family flooring business, had reached a boiling point, and with a lifetime of investment in that company behind her, Pape walked out, unsure of what she planned to do or from where her next paycheck would come.

It was the heart of the recession, after all, and many flooring businesses, even long-established ones, were closing their doors. Pape considered what her flooring industry experience might get her—a job with a supplier, perhaps, or a position with a distributor—but by the end of the day, she had made the decision to strike out on her own, establishing SP Floors & Design Center, which was recently named CarpetsPlus ColorTile’s Retailer of the Year.

STEPPING OUT ON HER OWN
The evening of the day she left the family business, Pape made five phone calls: one to each of her two largest accounts and one to each of her two largest suppliers. She explained the situation and asked for their support. With them on board, she made her fifth phone call to Ryan Dunn, COO of CarpetsPlus Colortile, the affiliation with which her former business was associated. “I told Ryan, ‘I left my business, and I’m starting a new one. I’ll call you on Tuesday to tell you what it’s called and where it’s located,’” recalls Pape.

Pape set up shop in her basement and signed on former employee Veronica Sutyak as her general manager. She had her shipments sent to a friend’s warehouse and was in operation by the end of the week.

Pape believes that the reason she was able to establish her business so quickly was because of the relationships she had fostered. “I can’t say enough about how important it is to conduct yourself with honesty and integrity in business—not only with your customers but with your suppliers as well. I would never have been able to open an account with a supplier in a single day if I hadn’t had a good relationship with them previously. They trusted me as a brand new company, and customers handed over hundreds of thousands of dollars of business because they trusted me.”

Pape soon outgrew her garage and leased a former Ford dealership for her business. She turned the space into a designer showroom, but that solution turned out to be short lived. Only two years in, the property was sold and scheduled for demolition, and Pape was given a 60-day notice to vacate the premises.

Unwilling to risk a similar event occurring again, Pape was determined to purchase a building the second time around, “I wanted to make sure I was paying mortgage, not rent,” Pape explains. “Because of the downturn, the second property I moved into was one that I could never afford now. It’s in a great area, on a main thoroughfare. The location has really helped the retail side of the business, but also the contract side, too. I am convinced that more homebuilders and contractors work with us because of our facility.”

SERVING A NEW MARKET
Though SP Floors’ location is within five miles of her former business, it is situated in what Pape describes as an up-and-coming neighborhood with higher and rising incomes. “Where we are now, you see Millennials and younger families moving in. There are larger homes, and they’ve been updated. There is a better school district, and the average income is higher,” she explains. “It is a very different customer than where I came from. Our average sale here is probably triple what it was there, and the average income is probably triple as well.”

That difference has certainly impacted the offering at SP Floors. “We have a more diverse offering, more specialty items,” Pape adds. “We’re more of a design house, whereas the last business was a flooring company, and carpet was our biggest selling item. We spend more time working with designers and decorators as well as new construction.”

Pape points out that property management, which comprised a great deal of her business previously, is extremely competitive as well as challenging. “Everyone struggles with labor. The only way to keep the good installers is by paying them more, and in property management, you just can’t,” she says.

REINVENTING THE CUSTOMER EXPERIENCE
When Pape set up SP Floors, she didn’t simply want to redo what she’d done previously; she wanted to improve upon it. She started by considering the typical business model in the area, looking at what was working and what wasn’t. “I had to reinvent myself in a short period of time,” recalls Pape. “So I considered, what is going to make us different? What is going to make us successful? What do people want from a buying experience?”

Ultimately, Pape determined that the best course of action was to create an atmosphere that puts customers as ease, a lighthearted and fun environment in which customers can make decisions in a relaxed manner.

To that end, SP Floors is family and pet friendly. In fact, Pape brings her dog Aspen to work every day. Aspen hangs out in the showroom, and customers often come in asking for her by name.

What’s more, Pape and her team take a different approach to the selection process: getting customers seated with a beverage and maybe even a snack while discussing their needs; then, as much as possible, bringing the samples to the customers—large, high quality samples that show the product as it truly looks once installed—rather than dragging the customers all over the showroom.

CATERING TO THE BUILDERS
When Stacey built out SP Floors, she created a builder selection center that operates out of the same building but is separate from the retail business completely. It even has its own entrance.

The center, which operates by appointment only, is designed so that builder customers can come into SP Floors and choose all their interior finishes—including flooring, countertops, cabinets and paint—in a single location. Pape explains, “We put it all together in one room to make the experience less complicated and overwhelming. The customer can pick out cabinets and paint colors and all their finishes in a single two- to three- hour appointment.”

The benefits of choosing all the finishes in a single location are significant. First and foremost, customers can see the products side by side in large samples, rather than having to imagine the pairings or carry tiny swatches of material from one location to another for comparison.

In addition, SP Floors presents the options and upgrades in an organized fashion, arranged by levels with predetermined pricing, and when customers are finished, they leave knowing the exact cost of their interior finishes. SP Floors then sends the order electronically to the builder so that the next step of the home building process can begin immediately.

This builder system worked so well that SP Floors has rolled out an adapted version to other area builders. “We bring products into the room based on what appointment we have coming in,” Pape says. “It’s a lot of work for every appointment, but our builders are committed to us because we do that. It creates a good buying experience for the builders’ customers, as the last step of the selection process in building the home, and it’s amazing what it does in helping us to sell a better quality product, which would never happen if the builder just had a couple of carpet samples in their lineup for customers to choose from. Customers will buy a better product if they are in a design environment working with design consultants.”

LOOKING FORWARD
Pape has built her systems to grow, and that is what she intends to do. She wants to open several locations, not just for her own benefit but for the benefit of her employees as well, with whom she wants to share the store’s success.

She is also committed to helping CarpetsPlus ColorTile achieve greater success, and this fall, the group is holding a summit at her store to educate other members about the success of her merchandising, systems and approach.

HIGH-TECH ADVERTISING TOOL
Pape made a large investment in an outdoor digital sign for her business, and she considers it to be one of her most important advertising tools. The full-color sign is advanced enough to show high-quality room scenes and product shots. In addition to these, SP Floors advertises its affiliation with CarpetsPlus ColorTile and also ties into Pittsburgh-area culture and events, like the Penguins making the playoffs.

While Pape was in the process of building out her location, the township in which her store resides outlawed digital signs with full-color, scroll or movement features on the basis of the fact that they create a Vegas-like atmosphere that can be somewhat inhospitable, especially to residents surrounding them.

With the help of the sign purveyor, Pape put together a PowerPoint presentation for the township council, showing that high-tech signs such as hers could be put to use in a neighbor-friendly way because they offer features such as pixel and brightness controls.

As a result, the council altered the ordinance to allow such signs, as long as they flip between images rather than move or scroll—a compromise with which Pape is satisfied.